We resumed our bimonthly blind tastings with Napa Cabernet blind tasting. I wanted to share some of the bottles we had brought back from our trip in March, and what better way than a tasting? Given the expensive nature of Napa Cabs, I have to wonder if the guests felt the same way.

Days before, Ted joked that he was was decanting his wine for two days to improve the taste. He teased about how good it was smelling.

We started with a toast to Shannon's birthday, drinking Sue's favorite champagne from our visit to Mumm's. We had quite the spread. Bob had brought a plateful of scrumptious cheese, Lili brought a basket of incredible empanadas, and we had a plate of Italian meats. Yumm! We indulged outside while we waited for everyone to arrive.

The last couple arrived just before seven. It was getting cold out, so we moved inside, blinded the wines, and started tasting. Things were a little tight, space wise. We need more of a banquet hall to handle a tasting for 12, but we made do.


Almost everyone thought the quality of the wines was much higher than usual. Jennifer told us Napa Cabs were her favorite, and she couldn't help enjoying them all. My notes were pretty pathetic, but Shannon's sounded like a haiku. We made it through the 9 wines and tallied up the votes.

G - 2006 Darioush came in second place with an average of 3.91, a virtual tie for first. We picked this up at the winery on our recent Napa trip. It cost $88 at the winery.

H - 2008 Hartwell, Estate Reserve, Stags Leap District came in third place with an average of 3.78. We also picked this up at the winery on our recent Napa trip. We payed $100 for it at the winery, which was club price, retail is $125.

C - 2007 Stag's Leap Wine Cellars, Fay, Estate came in fourth place with an average of 3.77, a virtual tie for third. Paul and Jennifer brought this. Stag's Leap is Jennifer's favorite winery. They paid the club price of $100.

D - 2007 Ladera came in fifth place with an average of  3.61. Bob brought this. KnL's website help convince him: 90 points Robert Parker's Wine Advocate: "The least expensive effort, and a top value for a Napa Cabernet..." It cost $30.

E - 2006 Elyse, Tierjen Vinyard came in sixth place with an average of 3.60. Michel brought this. He had been to the winery years ago and really enjoyed it. It cost $37.

I - 2007 Cade, Howell Mountain came in seventh place with an average of  3.55. We also picked this up at the winery on our recent Napa trip. It cost $72 at the winery.

A - 2008 Oakville Winery, Oakville came in eighth place with an average of 3.25. Sangmok and Kyonghee brought this. A wine lady at Costco recommended it to them after they said they were looking for one for a group wine tasting. She said she tried it and liked it a lot. It cost $39. 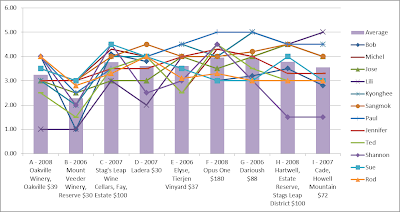 I was pretty shocked when I saw OpusOne won. It and the Darioush were incredible over blended, smooth wines. Ted and Shannon continue their dominance of the events they attend.

After tasting we enjoyed grilled beef, vegi, chicken, and shrimp kabobs, and a sweet dessert that Michel brought.
Posted by Rod Magnuson at 8:38 PM

As part of Spring Passport we visited Pleasant Valley Vineyards, one of the four wineries on the Corralitos Wine Trail. 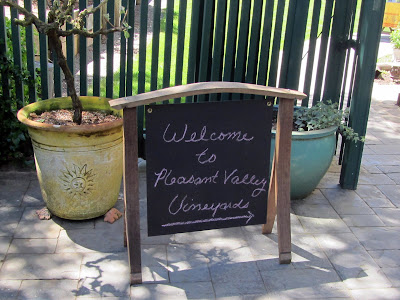 The tasting took place in their backyard. It was a beautiful oasis, surrounded by the estate vineyard growing Chardonney and Pinot, complete with a waterfall and their own giant red wood grove. It's hard to imagine a more perfect place. 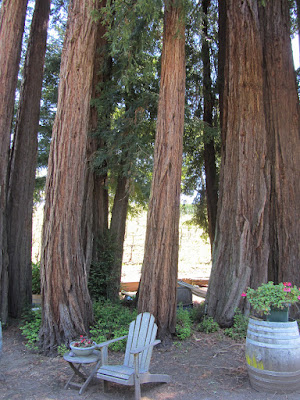 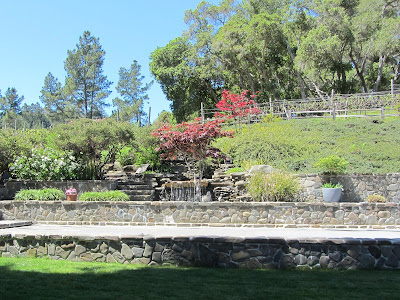 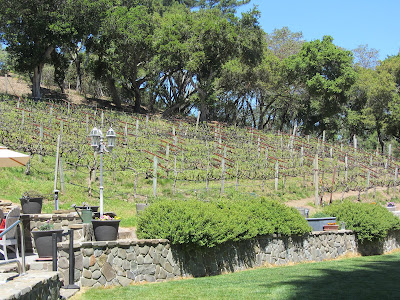 Pleasant Valley is a family run winery. Craig Handley is the wine maker. His wife Cathy, does all the pruning on the estate vines. Their son and his wife poured us tastes of Chardonnay, Pinot, Syrah, Merlot, and Zin. Their wines were all named after the grandchildren and themed according to their interests. The Merlot, one of my favorites, was named Casey Alexander and was decorated with pirates. According to his father, Casey's interests have moved on to Star Wars, but thought it unlikely Lucas would allow them to put light-sabers on the label royalty free. It was refreshing to see such family involvement. The wine was all very good. 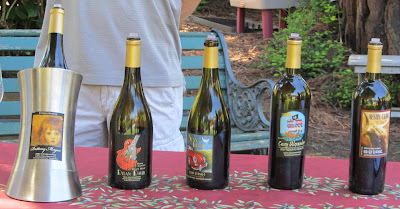 The adorable grandchildren were getting in on the action as well, selling colorings for $1 and $2. Bob and Carolyn got a kick out this and purchased one for a dollar. 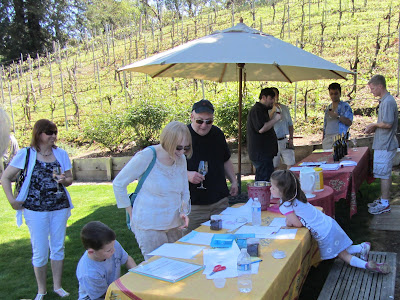 They were running a special on the wine, buy 3 get one free so we combined our orders and decided to purchase 2 Merlots, a Pinot, and a Zin. I went to see Cathy about the purchase. On the way I ran into Craig and told him how much we enjoyed his presentation at Pinot Paradise, just weeks before. Craig then asked if we were interested in a special Pinot tasting, which I'm guessing was for the wine club members. I said, "Sure!" He then poured us the some incredible Pinots and entertain us with interesting stories of his life.

Our favorites were the Willa's Block, the Lester Cuvee, and the Dylan David Estate Reserve. These were more expensive than the previous wines we tasted, but the scruptousness was ratcheted up accordingly. 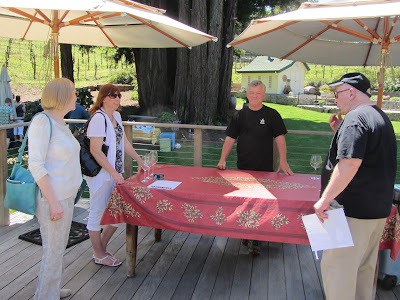 After making some addendums to our order, I again headed to see Cathy. We commented on how cute the grandchildren were. Cathy provided more evidence, telling us how Abby would introduce herself by saying, "I'm Abby Cabbie. My wine is really good!" It was very hot and Craig went the extra mile, hooking us up with a refrigerated box.

We had a great time at Pleasant Valley. The location and hospitality were second to none.
Posted by Rod Magnuson at 5:25 PM

I hemmed and hawed for a couple of weeks before finally deciding the Thursday before Spring Passport to hit a couple of wineries.

Using my wine app, I quickly worked up an itinerary of wineries I had never visited:

I let Bob know what I was thinking, since we always enjoy wine tasting with them, and they already owned a Santa Cruz Mountains Passport. He talked to the boss and said they were in.

Saturday morning Bob and Carolyn showed up just before 10. We piled into the Civic and headed over the hill. Luckily, traffic wasn't backed up yet and we made good time to Watsonville. That temperatures were in the 90s, which was unseasonably warm. I knew it would send everyone over the hill to the beach, which was one of the reasons why we left so early. 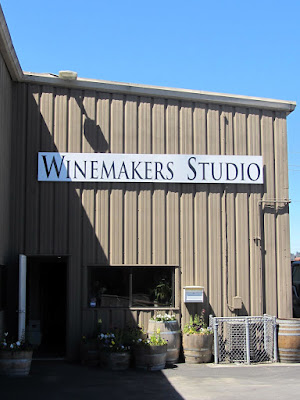 Surprisingly, we ended up at the Winermakers Studio. We were greeted by Mica Raas who told us about the co-op and the 3 wineries that were pouring there that day. He told us Al Drewke from Roudon-Smith must have hit some traffic coming over the hill, but he should be along any minute. He explained that while he wasn't a member of SCMWA, he honored passports and would love to share his wine with us. He didn't need to ask us twice.

Mica appeared young, but he explained that he had been making wine for the past twelve years and at a number of different places. Judging from his wine, he has learned a lot along the way.

I asked him where his name came from; he said it was biblical (Micah), but that he was named after the rock (Mica).

Mica infectiously poured us his creations. He showed real passion for his terrior driven wines. He poured Sauvignon Blanc, Zin, Charbono, which is apparently in low supply due to the inability to mechanize the vineyards, and CFM, his bordeaux style blend.

His labels had a color scheme to associate the taste. He said blue candy doesn't taste like blueberries, it tastes like blue. I'm not certain I totally grasped it, but it was an interesting idea and the labels looked nice. 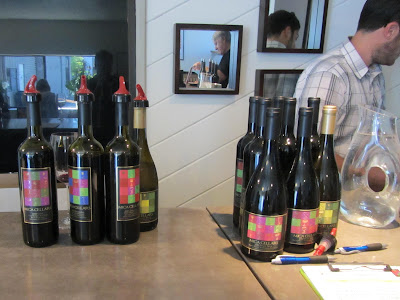 He also told us about his 91 point, "exceptional" Pinot, which he only served to Wine Club members. Bob quickly asked if he were to purchase a bottle would he allow us to taste it. Mica agreed, pouring us a taste. When Carolyn tried this she proclaimed it delicious, which is a gold star for any wine. I had to agree.

All the wines were very nice. My favorites were the Pinot and Zin. Additionally, Sue liked the Charbono, which I thought tasted interesting but didn't quite work for me. I even liked the Sauvignon Blanc, which is a rarity. 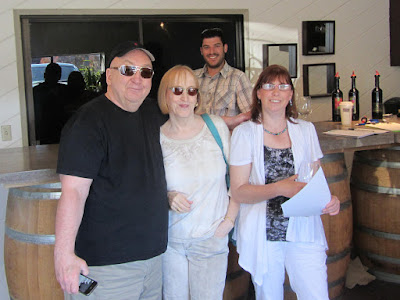 Al had arrived and was ready to start pouring as soon as we finished with Mica. He told us that they make wine that fits the fruit instead of forcing everything into the California style.

When I asked if he was Roudon or Smith, he told us a bit of their long history going back to 1972. Last year they split with their partner when they wanted to head different directions. This lead to two "new" wineries: Roudon-Smith Winery and Skov Winery.

Al poured started us out with Chard, followed by a very nice Pinot with hints of spice. This was probably my favorite.


Next Al poured us the RSW Cuvee, their blend which used to be called Claret. It was very drinkable and seemed an incredible deal at $15. It tasted to me like koolaid, which gave everyone else a good laugh. Of course the Nebraskan thinks koolaid is a good taste. :) The Zin and Duet were also very good. 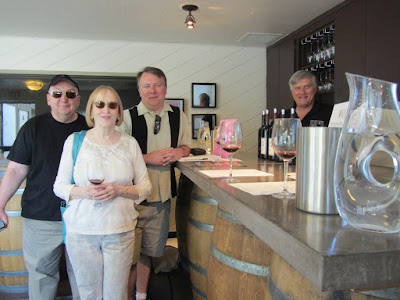 As a plus, Roudon-Smith Winery was paying the sales tax.

Unfortunately, someone came in that was strongly perfumed; this set off Carolyn's asthma, so we had to leave before we could try Bump which recently relocated from Sonoma.

Next we went to Pleasant Valley. See my post.

Winemakers Studio is a nice place to visit. The wine is incredibly reasonable. The wine makers are knowledgeable and entertaining. Like other urban wineries, it doesn't have the scenic views of many of the Santa Cruz Mountains wineries. However, it does have the advantage of providing access to a couple of wineries in one place.
Posted by Rod Magnuson at 5:13 PM

For the longest time Paul had been thinking we should do a Grenache tasting. Knowing this, I saved all the Grenaches I ran into for the eventual event. During the Christmas break, we finally got a chance to do the tasting.


Grandma watched the twins, allowing Paul and Jennifer to get out for a much needed break to taste some wine. We tasted five red Grenaches and had a wonderful dinner. Both of the girls had their favorites. Jennifer loved the Storrs, whereas Sue loved the Ridge. I thought all the wines were good, but none particularly struck my fancy.

E - 2008 Marilyn Remark, Wild Horse Road Vineyard, Monterey County came in first place with an average rating of 3.45. It cost $45. Sue and I brought this from our Monterey River Road trip with Ted and Shannon.

B - 2008 Marilyn Remark, Los Ositos Vineyard, Monterey County came in forth place with an average rating of 3.13, so close to 3rd. It cost $32. Sue and I also brought this from our  Monterey River Road trip.

C - 2009 Nicholson Vineyards, Old Vine Grenache, Santa Clara Valley came in last place with an average rating of 2.98, so close to everyone liking it. It cost $27. Sue and I brought this from our Corralitos Wine Trail trip. 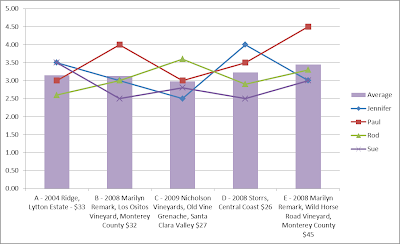