Reading An Ideal Wine turned me on to the interesting Rhys Vineyards.

A year later it was more of the same:

"We would like to thank you for your interest in our wines and for your patience. Unfortunately, we do not have enough wine to add new customers to our mailing list at this time. We do expect this situation to improve by early next year. We will be in touch in late January, hopefully with an email offering for you to order from our Spring 2013 Release!"

It all turned around this year:

"It's been almost two years since we've been able to offer wine to customers on our waiting list and we are excited to finally be able reward your patience. This offering of 2010 Rhys Bearwallow Pinot Noir is a great introduction to Rhys and we believe it is our best Anderson Valley bottling to date."

They allowed/allotted me to order 4 bottles of 2010 Rhys Bearwallow Pinot Noir at $60 a pop. I begrudgingly purchase special wines in that price ranges on occasion, but rarely one's I've never tried. 4 untasted and expensive bottles seemed extremely risky, and probably stupid, but it was my first allotment, and I didn't want them to forget about me in the future. I also put 2 bottles of 2010 Rhys Family Farm Vineyard Pinot Noir on my wish list, but was informed later that none of my wishes could be fulfilled.

The bottles arrived yesterday and we eagerly tried one last night. It tasted good, but young, and dissappointing. I reviewed the accompanying documentation to find: "We recommend cellaring all of our wines for 5+ years to reveal their full personality...". 5 minutes of in glass aeration does not equate to 5 years of in bottle aging. I marked the other 3 to open in 2018 and put them in the frig. I guess we'll know how ideal it is in 5 years, 7 years after reading about them. I'm not certain I'll purchase any from the next allotment; we'll see how silly I am then.
Posted by Rod Magnuson at 8:31 AM

Putting the Chronicle's Gold Pinots to the Test

After reading the results of the 2013 San Francisco Chronicle Wine Competition, I set about getting a hold of all of the Double Gold and Gold winning Pinots from the Santa Cruz Mountains for a tasting.

The weekend of Pinot Paradise we all got together. We started off with a delicious 2011 Beauregard, Bald Mountain, Chardonnay. All the usuals except Lili were in, 10 of us in total, requiring more than the usual one starter. I added a nice 2011 Woodenhead, French Colombard. We enjoyed cheese, Michel's truffle pâté, some scrumptious, sometimes mouth burning bacon wrapped potatoes, and catching up as we waited for everyone to arrive.

I brought out my Waterford wine glasses, a gift from years ago. The weekend before I gave all the glasses a 10 minute dip in a vat of CLR to remove all those embarrassing hard water stains that had prevented their appearance.

Jose arrived with a wonderful gift, a birthday gift if you will: A 2009 Stag's Leap Cellar, Fay. He told me that it was supposed to be really good and it had been given a rating in the mid 90s. I was thankful for the gift. At the time I found it ironic, thinking that Jose had rated the same wine, although a different vintage, a 1 in our Return to Napa Cab Tasting. Paul had brought the 2007 Fay and still gets riled up whenever Jose's rating is mentioned. I knew everyone would get a kick out of this and dutifully told them as they arrived. Jose later claimed the 2009 was rated much higher than the 2007. I didn't follow up.

Correction: The following Monday Jose alerted me that my ginkgo hadn't been working. In the Return to Napa Cab Tasting, Jose actually gave the Fay a 3. I had confused this with another tasting where Jose gave Paul and Jennifer's SLV a 1. My sincerest apologies for the accidental slander Jose. 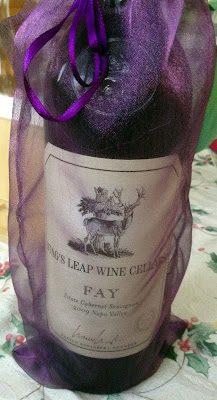 Bob and Carolyn arrived with a lovely arrangement of tulips, which Sue couldn't stop going on about. 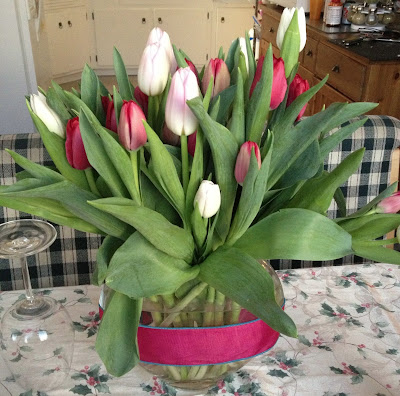 After everyone arrived, we tasted, compared notes, and enjoyed each other's company.

We went to Soquel earlier in the year. We even bought this award winning Pinot. Unfortunately, I bobbled it when transferring it into the house, breaking it in the driveway. I was glad to see it on the list, so I could try it again. I called them up and ordered another one for the tasting.

My daughter Alex needed some practice before taking her license test, so she drove us up to Savannah Chanelle. We picked up their winners, which interestingly enough, were not even being generally sold yet.

Sue and I went to Beauregard for Winter Passport and luckily picked up a couple of their 2011 Byington.

We had never tried Muccigrosso. They do not have a tasting room. You can purchase their wine from the website and they'll bring it to your door. I mistakenly got the wrong vintage, 2009, and they were gracious enough to get me the 2008. After trying them both, I believe I prefer the 2009. 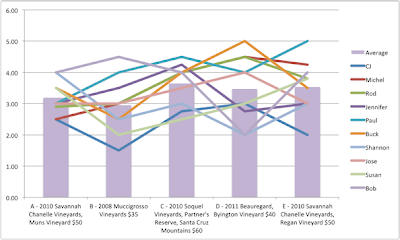 Sue then served us a spectacular meal of seafood chowder, lobster mac and cheese, coleslaw, and beef, chicken, and shrimp kabobs. We enjoy some Windy Oaks and a Domaine Serene that Michel brought.

For dessert we enjoyed a delicious Kahlua cake Shannon made and some Mochi Jose brought.


We saved the Artimesis Paul and Jennifer brought, along with the Fay for another day, perhaps even another tasting.
Posted by Rod Magnuson at 9:24 AM