The event took place at the impressive and beautiful Levi Stadium in the 501 club. We were told it was going to be outside and had prepared with sun block and hats. It was apparently moved inside due to the stage set up. This was probably a good thing. It's hard to imagine that it would have been as impressive outside in the heat; the 501 club was very spacious and cool climate wise.

Two patios were open to view the stadium. According to the friendly staff, workers were setting up the stage for 2 shows of The Grateful Dead the following weekend. One can only imagine the cloud that will be hovering over the stadium.

Food was very nice, a good selection of cheese and charcuterie along with 3 different types of sliders.

The wine was excellent, as you can expect from the Santa Cruz Mountains. Over 50 wineries were serving tastings of their best. When encountering this many wineries you have to pick and choose very carefully, otherwise they'll be pouring you out of the place. I could learn to taste and spit, but what fun would that be; I'm an enthusiast, not a professional. We usually start with wines we're less familiar with or have never tried and then pick and choose at our whims.

We got a chance to try some wineries we've never tried:


Many of our favorites were there.

The auction was fun. There was a good selection of large format bottles and cases. Although some of the minimum bids for the cases seemed a bit hefty, there were definitely deals to be had. The auction was run by GiveSmart. They used a web site to run the auction. You could monitor your bids from your phone. It was convenient and pretty cool to boot. 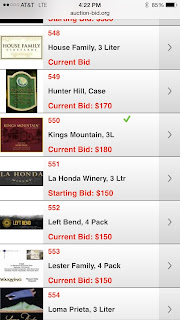 Overall we had a great time. I would probably attend again.

We didn't attend the $550 a head Wine Dinner and Live Auction, but because I had participated in the tasting auction I was able to see the silent auction items and bids. I'm pretty sure it was a tad above my pay grade. 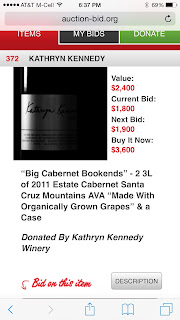 The San Jose Mercury News reports they raised over $600,000.

I purchased a 2013 Ghostwriter Pinot thinking it qualified for my < $30 SCM Pinot tasting. When I picked up the bottle I noticed it is designated Santa Cruz County. I don't see this listed as an AVA for California. Any ideas?


At the Silicon Valley Wine Action today we got a chance to talk with Ghostwriter. She explained that this was a cuvee and two of the sourcing vineyards were not consider Santa Cruz Mountains because of their elevation.