Burrell School was having their Sipping Session for the August club wines. I contacted the other club members to see who was doing what. Bob and Carolyn were interested in going as well as making their Storrs club pickup. I wanted to try something new, so I suggested we also hit Poetic.


We were the second party to arrive, minutes after the event started at one. Burrell holds its club events in its gazebo, a beautiful garden area behind the school house. The area has a nice view of the vineyard. An acoustic guitar player provided pleasant background music as we tasted. They had a nice assortment of crackers, cheese, bread, vegetables  purple potatoes, sausages, and shrimp po'boys to snack on in between tastes.


Burrell was tasting the new club releases: 2009 "Teacher's Pet" Chardonnay, 2009 "Extra Credit" Cab Franc, and the 2009 "Spring Break" Syrah. The Chard may have been drinkable, but the other two needed more time. Ironically, the tasting notes said the exact opposite. The pourer noted many times that we needed to decide when they were drinkable, depending on our tastes. This was an easy decision: Cellar them!


Burrell was also tasting futures. Dave, the wine maker, entertained and informed as he poured the 2010 "Teacher's Pet" Chardonnay, 2010 Old School Cabernet Sauvignon, 2009 "Honor Roll" Estate Merlot, and 2009 "Dean’s List" Cabernet Sauvignon. Futures are a great deal at 50% off, if you can cellar them for a couple of years. None of these wines are on my favorite list, so I only tasted the two cabs on Bob's insistence. Bob preferred the "Dean’s List" Cab over the Old School. It wasn't clear to me which was better.


We made a quick stop in the tasting room so Bob could taste the Cab Franc where we found coupons for a free tasting for two at Poetic. Burrell's tasting room has a nice porch area with a beautiful view of the vineyards. We usually eat lunch here, but since no one was ready for lunch, we decided to head down the road to Poetic.

20 or so minutes later we arrived at Poetic. On the way Sue noticed a winery sign pointing to Silver Mountain. It wasn't in my wine app, so I made a mental note to look it up when I got home.


Poetic had a spacious, inviting tasting room. There were tables inside, where patrons could sit and enjoy a glass of wine. The future wine was visible behind the tasting bar, aging in barrels. Outside they had a nice patio area.

Zack, the wine makers son, poured us tastes and answered our questions. When pouring the Petite Syrah, Zack noted hints of blue berries and leather. Carolyn asked, "What do you do? Throw in a leather strap?" Zack smiled, and said it was from the boots used to stomp the grapes. 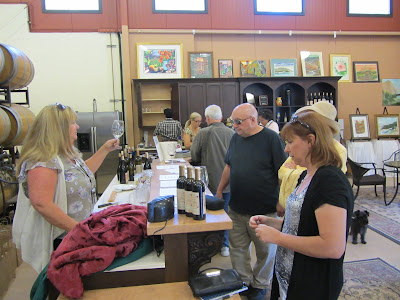 A lot was going on at Poetic besides wine tasting. Artists were selling paintings, jewelry, and jams. Everyone else tasted the jams and goat cheese from Friend in Cheeses. Sue really liked the lavendar plum jam with chevre cheese. She took some home along with a jar of Pinot Noir cherries.

They were also voting on the finalists in their cutest pet contest, Pets for Petite. The winner would receive a case of Petite Syrah. I voted for the only non dog, a bunny named Pirojok. The voting brought in a bunch of guests with their dogs, presumably to vote for them. The dogs erupted in bark fests from time to time, which was somewhat annoying.


We enjoyed lunch outside with a bottle of their Pinot then headed to Storrs.


Storrs' tasting room is a tad small. If you get more than a couple of groups in there, it can get a little crowded. Large groups are requested to make reservations where I believe they are served in a larger room.


What the tasting room lacks in size, the winery makes up for in varieties of great, mostly reasonably priced wines. We tasted six wines, but there were twenty-one on the menu ranging in price from $15 to $42. They have five Pinots and two Zinfandels! There were 3 to 4 other groups tasting, so the service was a little slow, but adequate.

We took home some 2007 Wildcat Ridge Pinot, which was given the Best Pinot Noir of Region at the California State Fair 2011, and 2006 Rusty Ridge Zinfandel. Good stuff, Maynard!

I followed up with Silver Mountain Vineyards. It turns out they have been there since 1979. It's open from noon to 5 on Saturdays. We'll be sure to hit it the next time we're in the area.
Posted by Rod Magnuson at 10:08 PM