While picking up my choices for the Petite Syrah tasting at K&L, I asked about red Burgundies. I have had very few French wines, but every now and then I get curious. I was helped by a knowledgeable, friendly, and enthusiastic gentleman that directed me to try three different regions, suggesting we could explore my preference in the future. I was surprised they were all inexpensive, the most being $26. I had been wiling to pay more, but he said typically the more expensive wines needed to be cellared. It sounded good to me, so I picked them up.

Bob and Carolyn came over Saturday evening for dinner and to help taste. Tasting is always more enjoyable with good company. 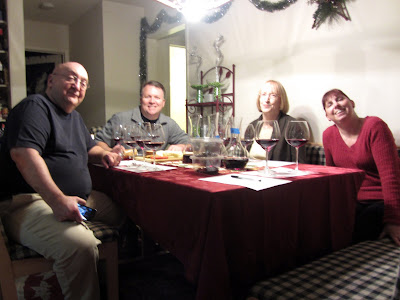 We started off tasting the three, which I had decanted for over an hour as suggested. I then threw in a special Oregon Pinot I had picked up for Thanksgiving, thinking it similar enough in taste to make sense comparing. We followed this up trying the bottle Bob had brought, a young Villa del Monte, which everyone agreed was much too young to drink. Lastly, I brought out a Windy Oaks, thinking Carolyn would enjoy the taste; unfortunately, I was wrong.

After all of these, Bob and Carolyn tasted a few of the Petite Syrahs left over from the tasting three nights before. Somewhere in between or after these, I opened a Picchetti Zin to boot, which Bob enjoyed. All the while we enjoyed cheese and good company.

A - 2009 Maison Champy Chorey-lès-Beaune came in first with an average rating of 3.25. This is one of the three that were recommended. Carolyn liked it. It cost $24.

B - 2009 Domaine Laleure-Piot (Champy) Cote de Nuits Villages "Les Bellevues" came in second with an average rating of 3.08. This is another of the three that were recommended. I enjoyed it a little more than the previous. It also cost $24.

C - 2009 Domaine Faiveley Mercurey "La Framboisiere" came in third with an average rating of 2.66. This is the last of the three that were recommended. I enjoyed this the most out of the three, though the differences between them was very small. It cost $26.

D - 2007 Domaine Drouhin, "Laurene," Dundee Hills, Pinot Noir came in fourth with an average rating of 2.55, barely behind C. I purchased this for Thanksgiving, though we didn't open it until Friday night, since Thanksgiving we still had a choice of most of the 8 bottles opened the night before. I thought it tasted very similar to a red burgundy, so I added it on a spur of the moment. It cost $65.

F - 2008 Windy Oaks, Estate Cuvee, Santa Cruz Mountains, Pinot Noir came in fifth with an average rating of 2. I picked this up at our trip down the Corralitos wine trail that I have yet to blog about. Windy Oaks specializes in subtle Pinots that are similar in nature to red burgundies. I threw it in because I knew Carolyn likes their Terra Nova and I figured she would enjoy this; I was wrong. It cost $31 for club members (yes, I joined their club).

E - 2010 Villa del Monte, Regan Vineyard, Santa Cruz Mountains, Pinot Noir came in last with an average rating of 1.5. Bob brought this. He had tasted it the weekend before at the winery. Most agreed it was not ready for consumption. It cost $24 for club members (Bob is a member). Earlier vintages of this wine are interestingly spicy.

The Burgundies all tasted very subtle and similar. I tended to enjoy more from A - C, while most other enjoyed the opposite. None of the them were spectacular, nor did any of them hint of great things to come, but what do I know. I'll have to do more research. One the plus side, Carolyn did enjoy A, which is rare at a red wine tasting.

After we finished, Sue grilled some wonderful steaks with shrimp skewers, which we enjoyed with salad, cheesy potatoes, my mother's recipe, and corn bread. Yum!
Posted by Rod Magnuson at 4:51 PM