After the $20 Dry Creek won the last Cab tasting, I thought maybe we should try to taste some of the inexpensive cabs. I called up John, the residential two buck chuck expert, and he said he was in; he would save a bottle from a good batch. Of the Usuals, only Bob and Carolyn were able to attend.

John had previously never been to a tasting, but has always suggested I throw in a Two Buck Chuck. I've always suspected this was less about keeping it honest and more about making fun of enthusiasts. I've considered it, but it didn't seem to fit the mood of the tastings, nor did it seem honest. John usually drinks 4 ounces a night for medicinal purposes, whereas I usually drink a glass or two a night for enjoyment.

We had some cheese left over from Sue's day care party earlier that day. I went to Whole Foods to fill in the gaps. I brought back three triple creams: a cow brie, a goat brie, and a truffle cow's brie that I've been warming up to since encountering it at Ted and Shannon's a couple of times. It was easy to choose a triple cream, but I wasn't sure on any of the others. In the end I over filled just the one gap.

I wasn't really looking forward to tasting inexpensive wine. I've had some experience trying to find a cheap Pinot in the past, and it was pretty frustrating. I threw in a more expensive wine to wet my appetite and add a bit of mystery to the event.

I informed everyone that the tasting included a Dry Creek, a Two Buck Chuck, and a bottle over $20. We poured the wines 3 at a time, allowing for some comparing; we didn't have enough glassware to handle a glass per wine, which would have been 35 glasses. 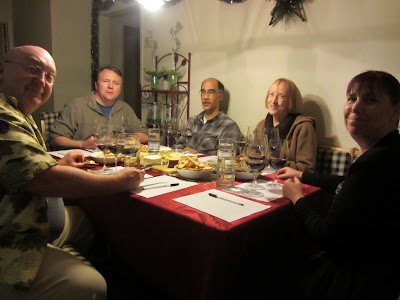 After tasting and enjoying cheese, some great bread Bob brought from the baker at Oracle, and each other's company, we tallied the ratings.

G - 2010 Charles Shaw, California aka Two Buck Chuck came in first place with an average rating of 3.14. It cost $2. John brought this. It was saved from a good batch.

D - 2007 Dry Creek, Dry Creek Valley came in third place with an average rating of 2.66. It cost $19. Sue and I also brought this. It was the cornerstone of the tasting since it won the last Cab tasting.

B - 2007 Kendall-Jackson, Grand Reserve, Sonoma County tied for fourth place with an average rating of 2.64, barely under the Dry Creek. It cost $20. Sue and I also brought this. Bob and I were doing some searching on K&L and somehow came across this. Believe it or not, it was given a 90-93 by Parker, 91 by Wine Enthusiast, and a 90 by Wine & Spirits.

C - 2008 Simi, Alexander Valley also tied for fourth place with an average rating of 2.64, barely under the Dry Creek. It cost $20. Bob and Carolyn brought this. Carolyn found this at a target. It was her first wine buy ever.

F - 2010 Robert Modavi, Private Selection, California came in sixth place with an average rating of 2.5. It cost $9. Bob and Carolyn also brought this. Bob referred to it as Hubba Bubba.

H - Oak Creek, California came in seventh place with an average rating of 2.38. It cost $3. John also brought this. He picked it up at CVS, because it was on sale for $2.50, which was close enough to $2 for him.

A - 2007 Kathryn Kennedy, Small Lot Cab, Santa Cruz Mountains came in last place with an average rating of 2. It cost $34. Sue and I also brought this. I rotated it in when I saw it at Whole Foods before the tasting. I'd had it before and always liked it.

Two Buck Chuck came out on top, while Kathryn Kennedy came in last. It was both surprising and depressing. What does this say? Your guess is as good as mine.

The only wine I rated above a 3, which mean I liked it, was the Dry Creek, which was sweet and chocolaty. The last 3 wines I tasted various forms of cigarette butt, though this left the Two Buck Chuck when it warmed up.

John's wines were easily identifiable, since they were very cold; he kept them in the refrigerator. You would think this would have had a detrimental effect on the scores, but it may have done the opposite.

Afterwards, Sue treated us to some wonderful chili and cornbread. Unfortunately, the salad ended up on the floor in a refrigerator accident.
Posted by Rod Magnuson at 8:40 AM