It was pouring and I was still recovering from the cold that had hit me earlier in the week, but this didn't stop me from thinking I could use the Pathway to Pinot Paradise event to further my goal to visit all the wineries in the area. I'm crazy that way.

I made a list of the participating Santa Cruz Mountain wineries I had yet to visit:


At first I wanted to go over the hill, but the rain and my hazy head made me think something closer would be better. I settled on starting at House Family Winery.

Sue and I headed out into the wet weather after enjoying a late breakfast of eggs. 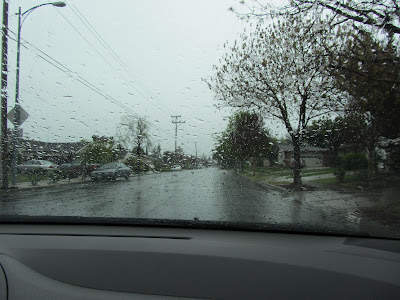 House was surprisingly close, only 3.5 miles away. We were the first arrivals of the day. The weather was worse there, the wind was really whipping. I wondered if anyone else would be braving the weather that day. Jim House and Jim Cargill and his son welcomed us from their white tasting tent, a heated, mostly dry patch of wine tasting warmness. 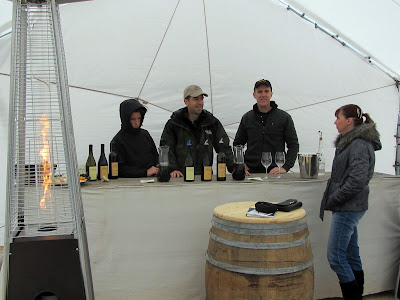 Jim House answered our questions as he poured us a vertical, 2010, 2008, 2009, of their scrumptious Pinot. 2010 was the first sold to the public. 2008 and 2009 were not available in enough quantity for the public to enjoy. At times the wind ripped through the canvas of the tent creating quite a roar, making it nearly impossible to hear what was being said. I somewhat humorously questioned whether the structure would hold; they assured us it was anchored to some rocks.

Jim followed the vertical up with a barrel sampling that they themselves had only tasted for the first time 20 minutes before. He completed the tasting with a white burgundy styled Chardonnay and their Cabernet Sauvignon, which they are mostly known for.

House mostly sells their wine directly and through their club. Jeffery Patterson of Mount Eden fame is their wine maker. 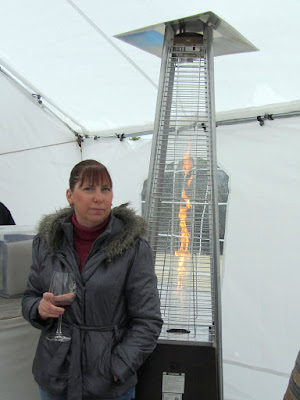 On warmer days the tastings are held outside. We were shown pictures of the location on an iPad. The sunny pictures looked great and were quite a contrast. From the tent you could see up the hill to part of the vineyard and the backside of the tasting area. 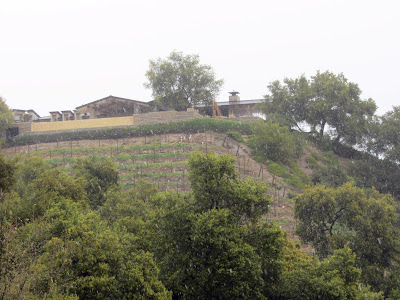 Eventually another car came by, carrying 4 wine enthusiasts, and then another. By the time we were ready to head on, 6 other crazies were enjoying the House Family wines with us. The storm had died down enough to take some pictures outside the tent. 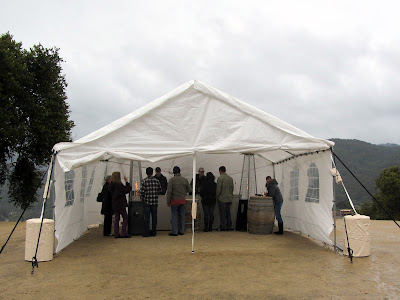 Sue and I had quite an adventure visiting the House Family Winery. We took home some of the Pinot and Cab to enjoy later. I'll mark them off my list, but I'll keep them in mind for a nice day, when we can enjoy their real tasting area.