While walking one night on our quest to satisfy our Fitbit slave master, Sue and I decided the seeing our friends trend line was going the wrong direction and we should do something about it. We decided to have a tasting. The closest open date we had was close to my birthday, so we called it a birthday tasting (shocker!). Even more shocking was that I decided to have a Pinot tasting.

As soon as we got confirmation from the majority I was off to the races, searching for the most interesting Pinots I could find. In the end I busted my budget and purchased close to a case from K&L alone. Somehow, the idea that it's your birthday puts one into splurgefest mode.

We washed all the glasses in preparation. You would think this would be easy, but even with Stem Shine Crystal Dishwashing Powder, the supposed solution to all our woes, and vinegar it proved challenging. In the end, we prevailed, or at least no one complained.


There was one misunderstanding. A white Pinot was brought. I apologized to its owner since I hadn't clarified which type of Pinot. I will make certain this is clear next time. For this reason F was removed from the tasting at its owners request.


Sue made bacon wrapped potatoes, a recipe my sister Kellie turned us on to. Yum. We had more meats and cheeses than one could ever hope to eat. For the main course, we splurged on 11.2 lbs of Prime and Kobe Fred's Steak from Schaub; Bob and Paul turned me on to this stuff; it's crazy delicious meat. We ate, we tasted, we rated, all while enjoying each others company.

E - 2012 Landmark Vineyards Overlook came in first place with an average of 3.71. It was on sale at Safeway for $20 with a club card, $30 normally. Jose chose this because there were only a few left. Sadly Jose was gone for the tasting, picking up Lili at the airport. They both arrived later to enjoy his victory.

H - 2010 Clos Pepe Estate, Sta. Rita Hills came in second place with an average of 3.39. It cost $60. Paul and Jennifer brought this because its sign said Robert Parker gave it 95 points.

D - 2011 Walter Hansel, Russian River, North Slope Vineyard came in third place with an average of 3.17. It cost $38. Carlos and Ling brought this. Carlos figured something from the Russian River was a good idea.

B - 2010 Miner, Garys' Vineyard, Santa Lucia Highlands came in fourth place with an average of 3.03. It cost $50 on sale. Ted and Shannon brought this. Shannon chose this; Ted made sure we all knew his reputation for winning wasn't on the line. She wanted to bring an Oregon pinot, but couldn't find one, so settled on a Gary's Vineyard pick.

J - Silvertip, Estate, Santa Cruz Mountains came in fifth place with an average of 3. Michel brought this. It cost $28 with his club discount, $35 regularly. He brought it because he knew at least Jose, Ted, me and him really enjoy it.

G - 2006 Freeman, Sonoma Coast came in sixth place with an average of 2.87. It cost $50. Sue and I brought this. This was the second oldest of the ones I bought from KnL. I found it on a list googling for the best California Pinots.

A - 2000 David Bruce, "Commemerative", Santa Cruz Mountains came in 7th place with an average of 2.83. It cost $50. Sue and I also brought this. I found it while searching for Santa Cruz Mountains wines I've never tried on K&L. It even came in its own box. It was probably a little over the hill. 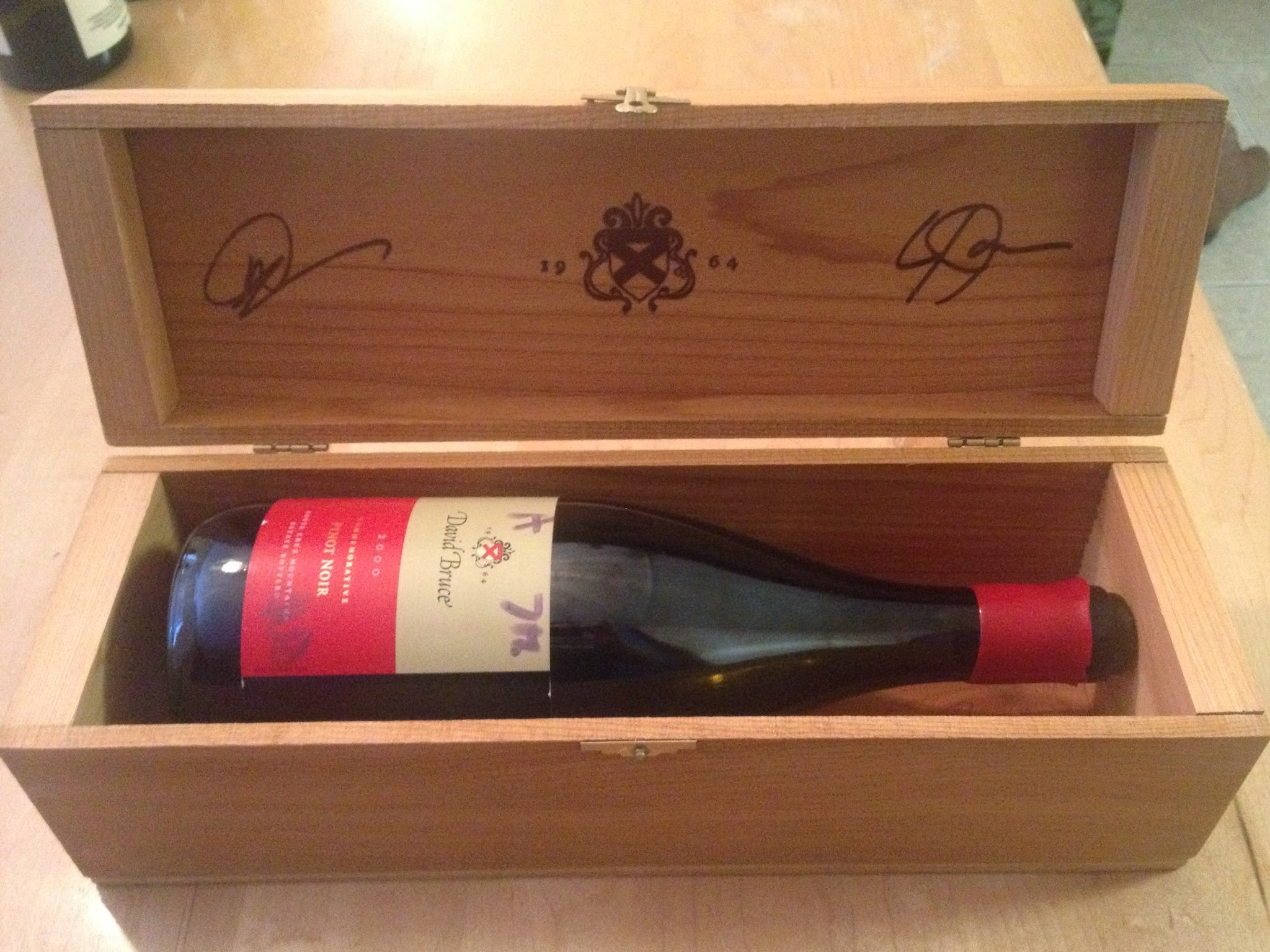 C - 2008 Thomas, Dundee Hills came in eight place with an average of 2.56. It cost $114. Mac and Rebecca brought this. Mac picked it, trying to get something nobody had tried before.

I - 2006 Vosne-Romanee, 1st Cru - Les Suchots came in last place with an average of 1.68. It cost $60. Bob and Caroline brought this French wine. The clerk recommended it.

I may not have found any incredible Pinots, but I had an great time with my family and friends.

After the tasting, we enjoyed all the Picchetti Zin I had in my cellars, even the 3 Ted had asked me to pick up.
Posted by Rod Magnuson at 5:05 PM