When the results of the San Francisco Wine Competition come out, my mind races with ideas to try them - yes I'm that kind of wine enthusiast. Not surprising to anyone that knows me, I decided to blind taste all the Gold and up Santa Cruz Mountains Pinot winners. I tend towards Pinots and while we enjoy wine from different regions, I favor the Santa Cruz Mountains given its local and has an endless supply of great wine.

We managed to get all but one of the winners:

Unfortunately I was unable to find a bottle of the 2012 Savannah Chanelle Vineyards, Muns Vineyard - Gold. Next year I promise to react more quickly to the results. Medal winning helps wines sell out.


The wines were opened an hour before the tasting began, which hopefully helped them open up a little; they were a little young to drink.

Sue took the opportunity to change the look of the backyard. My initial thoughts are typically resistive, as Sue has learned to expect and justifiably ignore, but in the end I usually come around. The updated look was pretty impressive, complete with firefly lights. 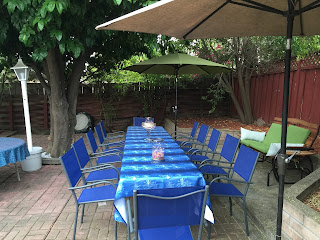 The usuals all showed up. We tasted, discussed, rated, and loudly discussed politics some.

A - 2013 Soquel Vineyards, Lester Family Vineyards came in first place with an average of 3.60. It cost $39. We picked up all of the Soquel on a trip to the winery with Bob and Carolyn. The Soquel winery is a lovely place, a seeming oasis given the surroundings. They were serving pizza fresh out of their pizza oven, which was a nice treat. I always wonder why we don't belong when we leave. 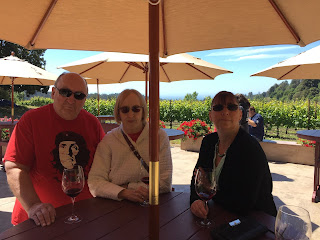 G - 2011 Storrs Winery and Vineyards, Christie Vineyard came in fifth place with an average of 2.96. We thought we had picked this up on a trip to the winery, but when I checked the year I realized we had picked up 2009. Thankfully, I was able to order the correct vintage from the web site and it arrived in time.

D - 2012 Woodenhead, Lester Family came in sixth place with an average of 2.82. It cost $42. The winery was sold out of this; they tried to find me a bottle when they heard what we were doing, but they could not. Luckily, I found this at The Wine House via wine-searcher.

B - 2012 Villa del Monte Winery, William Vincent came in last place with an average of 2.60. It cost $37. The winery was sold out of this wine, but after looking around they found me a double magnum.


They even graciously signed it for me when I picked it up. Thank you Neil and John. 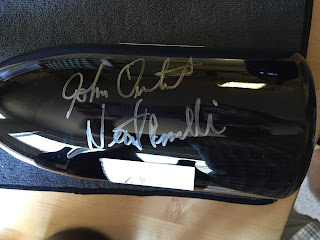 I wasn't about to use this bottle for a tasting. I was prepared to apologize about not putting it in the tasting, or possibly using a different vintage, but I luckily found a bottle down the street from the winery at Summit Store.
Posted by Rod Magnuson at 2:05 PM