On my birthday we were joined by our friends for the fifth and final tasting of Santa Cruz Mountains Pinots under $30.

It rained days before and there was a chance of rain on the 25th so we decided to have it inside. In the end it turned out to be a beautiful, cool spring day. 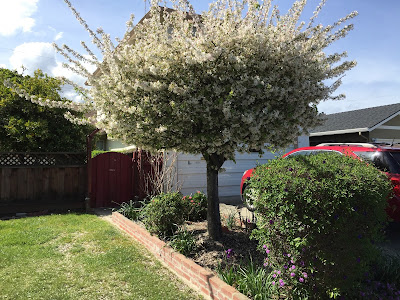 Unfortunately, outside was cold and a mess from the storms. We would have to make inside work. Sue planned well. She had rented smaller chairs to fit everyone in. It was tight, but would have to work. 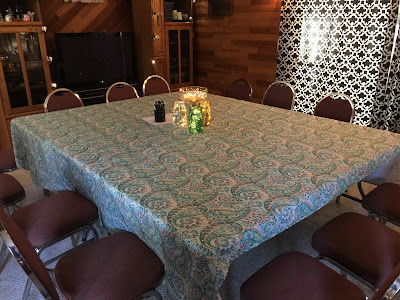 Since it was my birthday, I thought it a perfect time to open some of the larger bottles in my cellar. I opened and chilled a magnum of 2014 Rhys, Bearwallow, Chardonnay to start. It was like unwrapping my first birthday present of the day. A beautiful bottle in a beautiful package. 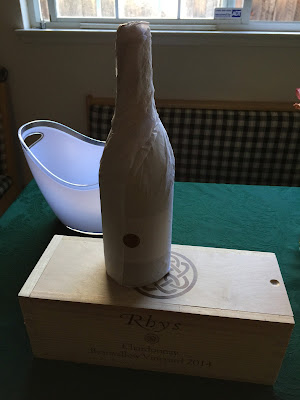 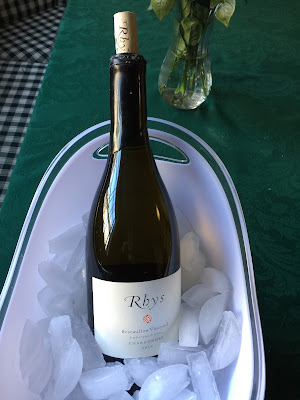 I was worried I had frozen and possibly destroyed it when I noticed a large chain of wine sediment, but judging from its taste my worries were for naught. I don't usually see a lot of sediment in whites, but perhaps that's because I don't normally age them. We definitely opened it before its prime. We're still holding the first white we bought from Rhys, waiting for their vintage chart to indicate they recommend drinking it. The Bearwallow hasn't even showed up on their vintage chart yet, but Sue and I thought it was ready to drink a year or so back when we tried and fell in love with it. Maybe we'll wait to full maturity on our other bottle.

I got out the wine charms and chose the purple koala. Silly, but fun. 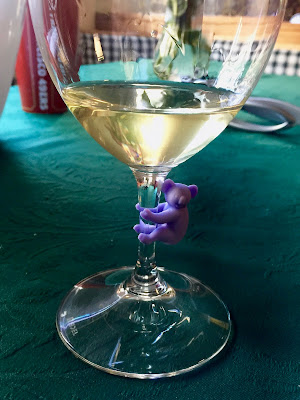 I followed this up with another one of my favorites: A Patz & Hall, Hyde, Chardonnay. Mmmm.

Sue lovingly presented all my favorites starters: Bacon wrapped potatoes, pork dumplings, and meats and cheeses. One of the best parts of your birthday is getting to pick all your favorites. It's good to be the birthday boy!

We had a great time tasting and enjoying each other's company. Lots of love and not a lot of politics.

After the tasting, I opened more big bottles: A magnum of 2012 Patz & Hall, Pisoni Pinot, a magnum of 2012 Windy Oaks, Proprietor's Reserve Pinot, and a double magnum of 2011 Silvertip, Estate Pinot. There wasn't a shortage of good wine. 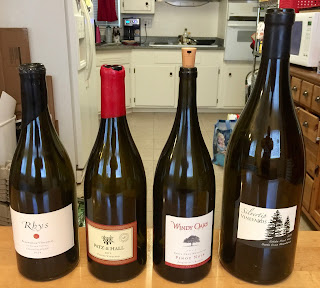 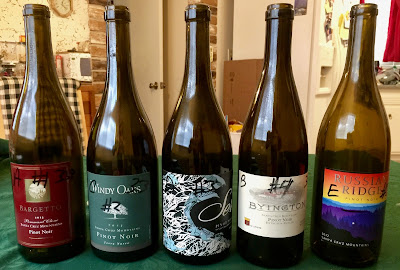 A - 2013 Bargetto, Pommard Clone, Santa Cruz Mountains came in first place with an average of 3.38.

E - 2012 Russian Ridge, Santa Cruz Mountains was unfortunately corked. If we do another tasting of all the winners, I may try and throw in a bottle of this.
Posted by Rod Magnuson at 2:39 PM