Michel sent out his proposed rules:

We will taste 3 DIFFERENT wines 😊  Like we were suppose to do last time.

I can pick the 3 wines or someone can bring their own choice, if they would like.   The wines must be Cabs and must be between $35 and $50 approximately.   If someone wants to bring their own, they have to bring me 4 bottles of it (or I can go pick it up at your place).

I will then create 4 packages of three bottles, all in brown bags, with marked corked top, and bottles will be marked A, B and C, because I would like for all of us to taste the same bottle together.

I will deliver each of you a package of three bottles, some days ahead of the tasting, which could be on Saturday May 23rd.

If that date works for you and you would like to chose a wine, please let me know ASAP, so I don’t buy more than needed.

I thought Ted and I were going to submit bottles. In the ends Michel supplied two and I supplied one. I chose from the SF Chronicle's Wine Competition Cabernet Winners.
Michel graciously picked up my wine and delivered the set to everyone. Ted's rocket ship wasn't necessary.
Jose texted that he was ready days before. 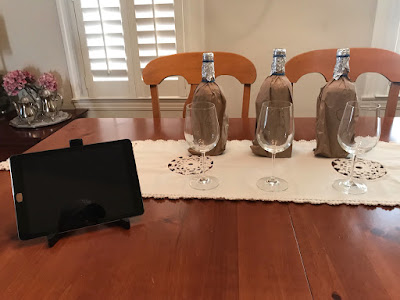 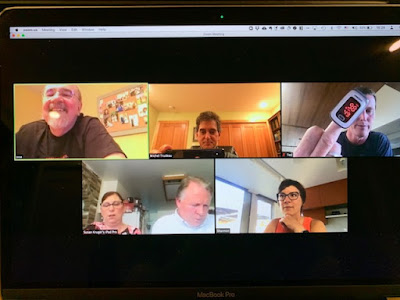 B 2016 Justin, Isosceles, Paso Robles - came in first place with an average of 3.76. It cost $47. It is usually priced out of the range, but a friend, who is an owner of a wine store, gave it to him at cost. It's listed as a Bordeaux blend. At a bigger tasting, price or blend might have disqualified it.
A 2016 McGrail Vineyards, Reserve, Livermore Valley - came in second place with an average of 3.58. It cost $48.
C 2016 Peju, Napa Valley- came in last place with an average of 3.13. It cost $41. Michel likes it for the price.
Our wine was too hot when we tasted it, but a later retasting at proper temperature confirmed at least the ones we liked the most.
Everyone having the same labeled wines I think helped. I'm not certain the aluminum foil was worth it, but it did hide the cork until extracted.
Vinvino came up as a source of future tastings. It scored the Justin a 4.5, the McGrail a 4.1, and the Peju a 4.2. Vivino's top rated Cabs from $30 - $50 looked like an interesting tasting to me.
Posted by Rod Magnuson at 3:32 PM