Ted mentioned that Cameron Diaz had some new wine that wasn't supposed to give you a hangover after a couple of glasses or bottles, it was unclear which. Soon thereafter I saw a Wine Enthusiast Facebook post titled “Rosé is for When You Want to Get a Little Fancy,” Says Post Malone. We like to get a little fancy, so I started looking for celebrity rosés to taste. I did a little research and decided to add Jon Bon Jovi's and Brad Pitt and Angelina Jolie's rosés in the mix.

I didn't ask the usuals if they were interested, because I assumed they would not be. We asked both of our sisters and they were happy to participate.

When the bottles arrived I sent a picture of them to Ted and Carlos titled, "The tasting nobody asked for" 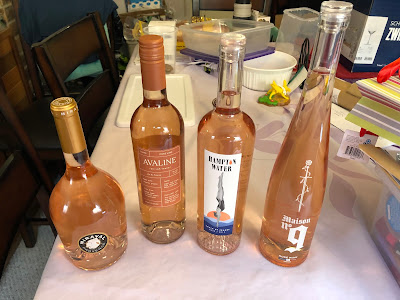 To my surprise, Ted thought Shannon would be interested.

Days later I was talking to Paul, telling him about this horrible tasting I had planned. He too said he was interested.

I looked up the serving temperature for rosés and found there were two options.

I chose to serve the rosés at the cooler temperature.

Months later everyone had the wine and we met on the Saturday after the election. 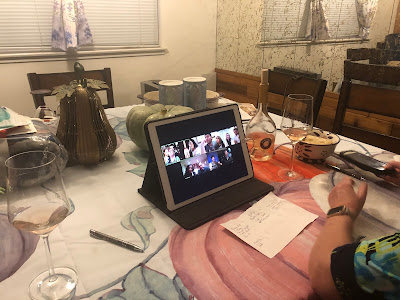 Sue's sister, Barb, joined us from Massachusetts. Two of her children and their significant others also joined. So many that she had to zoom in twice. My sister Kellie joined us from Nebraska with Katie and a cameo by my mother and nephew Elliot. The rest of us joined from California. It was a coast to coast rosé tasting.

We tasted the wines, laughed, enjoyed each other's company, and learned new words. We could not truly blind the wines, given the bottle's unique sizes and the remote complications. We went through them one by one and stack ranked them.

Ted joined us to socialize, but he did not partake in any of the rosés. He does not like rosés. 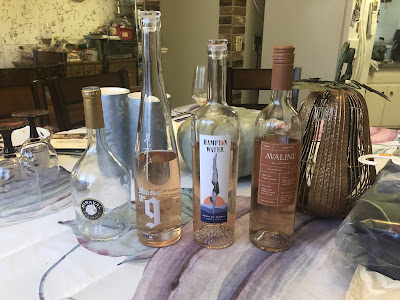 Shannon said they served this at cincin at some point.

Katie said she thought this tasted like it would give you a hang over the next day.

Hampton Water Rose 2019 came in third. It cost $20 from wine.com.
Shannon said this tasted like baby aspirin. Many of us agreed.
Barb liked this the best and kept saying I knew her taste.
Avaline Rose came in last. It also cost $20 from wine.com.
This was vegan friendly and organic.
It was surprising that all of the wines were made in France.
Posted by Rod Magnuson at 4:00 PM