Can I Get that Merlot in a Box?

Bordeaux in a Box made me think I should explore boxed wine. I googled for lists of the best boxed wine, found the varietal intersection at the local Safeway, Merlot, and planned a tasting.

The weekend before the tasting we had headed to Jose's for a block party picnic. Sue had picked up two cakes at La Patisserie before I told her Lili had picked up a flan. Instead of bringing over both cakes, which we thought would be too much, we decided to just bring the fruit torte, leaving us with a gorgeous chocolate decadence, described as, a chocolate cake, truffle filling, iced with chocolate fudge, in the refrigerator. Not wanting to let the cake go bad inspired us. We invited some friends over, threw in a tasting, and a dinner to boot.

Everyone arrived to enjoy a splash of Silvertip's Rose of Syrah accompanied by plenty of meats and cheeses. I've really taken a shine to the Italian meats and tend to go overboard on the varieties, which is definitely a splurge.

To mix it up, I added two bottled Merlots to the 3 boxed. The boxes made it hard to anonymously randomize, since I couldn't bag them. I poured everything into decanters, hoping no one would notice the differences in volume. I knew what wine was poured into what decanter, but figured if I thought it was affecting me, I would scrub my scores.

We tried the wines one by one, sharing our thoughts, and enjoying each other's company. After the first one, which I knew at the time was boxed, I pretty much forgot what everything else was.

We totalled the ratings and unveiled the wines.

A - 2010 Black Box, California came in first place with an average of 3.24. It cost $20 at Safeway. It was smooth and nice, though not incredible. This was the only one of the boxed wines that was finished after the results were revealed.

C - 2009 Selene, Napa Valley, Frediani Vineyard came in close second with an average of 3.21. It cost $36 from KnL. This was the highest Wine Advocate rated Merlot from California in the $25-$50 range. Jose really liked this wine.

E - Le Bordeaux came in last place with an average of 1.83. It cost $30. When I picked this up at KnL originally, the clerk said it was better than a lot of wine; next time I'll recommend he try Black Box or Bota. 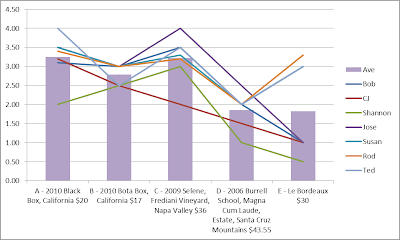 Amazingly a $20 boxed wine had the highest rating. We'll have to try this one again. $5 a bottle and lasts a month sounds like a pretty good deal. I might have to put the Pinot aside and drink some @#$!ing Merlot.

Sue made chicken, beef, shrimp, and veggi kabobs with cheesy potatoes and tomato salad for dinner. Yum! For dessert we had the incredibly rich and delicious cake. Thankfully, it had not gone bad.

Given the information I had, one can argue I was tainted and this invalidated the tasting. I won't disagree, since the lack of information is why we blind taste. I can't be certain that it would have changed the results and I don't really want to do the tasting again, given so many other wines to try. However, I will try to improve the process in future tastings by disclosing any oddities in the usual double blind randomization before a tasting starts, and first pouring any boxed wines into bottles, so a true double blind can occur.
Posted by Rod Magnuson at 8:28 AM