Laboring Over Some Cab Franc

After hemming and hawing, we finally decided to have a small BBQ over the long weekend. We threw in a tasting to add to the entertainment.

It was a beautiful Sunday. We set up outback, under the giant fruit tree, risking the wrath of falling grapefruit. This was Sue's idea, which I was wary of, but it worked nicely. 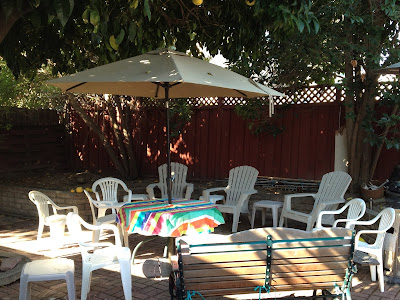 I had been saving five Cab Francs for such an occasion, acquired mostly from our frequent visits to local wineries. My plan was to put them all out, providing all of the wines for the tasting, but Jose insisted on bringing a bottle, which opened the door for Bob to bring one as well. Five bottles seemed like a good amount all things considered. I chose the two that I thought would be the best and eeni meenie miney mo'd one out of the remaining three, which I thought were equally less likely to win.

I opened a 2011 Olivia's Reserve Soquel Chard to start us off while we enjoyed quite the spread. Lili brought a scrumptous Spanish Tortilla she had whipped up, containing potatoes, sausage, onion, eggs, and fresh zucchini from her garden. Bob and CJ brought eight types of cheese, crab dip, and crackers; this after I asked Bob not to go overboard when he volunteered to bring cheese. Bob's definition of overboard must be different than mine. We put out a plate of five types of Italian meats with fresh bread. The chard was light and refreshing, the food plentiful, and the company warm. 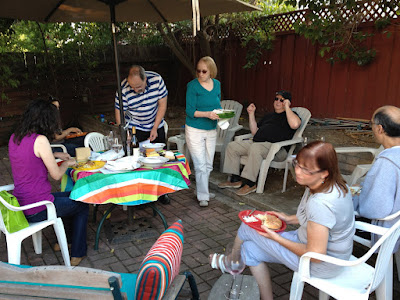 Everyone was pleased to see Paul, Jennifer, and especially their twins. The boys entertained themselves under their parent's watchful eyes by drawing with chalk, playing with trains, and gathering fruit, when not being smothered by the ladies. 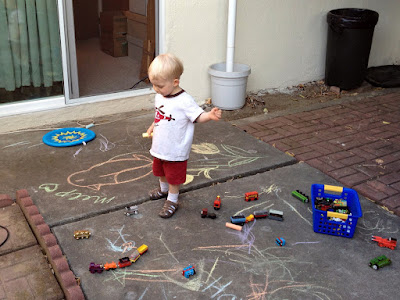 Park and Sue randomized the bottles into decanters, and we put them out for people to enjoy and rate at their leisure.

While tasting, Jose protested the "non controversial" Netflix rating system, once again, in favor of his own:
It was noted that Jose had never given a 5 to any wine. Or was it that he'd never bought a case? We tallied up the ratings and ripped open the bags.

E - 2009 Hunter Hill, Silvaspoons Vineyards, Lodi came in second place with an average of 3.07. It cost $20. We picked this up at the winery last weekend.


B - 2005 Thomas Fogarty, Gist Ranch, Santa Cruz Mountains came in third place with an average of 3.01. It cost $45. I picked this up at the winery when Mark was in town. 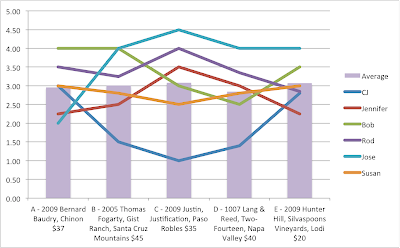 After reviewing the bottles, I noticed that the winner wasn't labeled as a Cabernet Franc. Studying the label showed it only contained 67% Cab Franc. Wiki states "In the USA, the Alcohol and Tobacco Tax and Trade Bureau regulations specify a minimum variety content of 75% of the labeled grape." Jose can have this win, but we'll have to clarify what the rules are for future tastings.

When the wives started putting on coats and shawls, we moved inside. Sue had whipped up a batch of brownies, which Lili volunteered to cut after seeing me butcher the first line. Lili continued the butchering, and proclaimed that she didn't get brownies. We all had a good laugh and enjoyed chocolate mess.