I'm Dreaming of a Malbec Christmas

While attempting to purchase all the wines I could find and afford on Wine Spectator 2012 most interesting wine list, I purchased the #10: 2010 Achaval Ferrer, Finca Bella Vista, Malbec. This inspired me to put a blind tasting together after a long hiatus.

Since the limited selection at K&L were mostly below $20, we threw out the $20 limit, though this wasn't necessarily clear to everyone. After the Cab Franc fiasco I also said the bottle had to state Malbec as well, in an attempt to remove blends. I later stated the bottle had to be designated Malbec, but some argued I was being too strict. I stopped lawyering and hoped.

The doors opened at 6, with the plan to start tasting at 6:30. Bob and Cj were the first to arrive, followed by Michel. Park helped direct the participants to remove the foil, uncork, replace the cork, and bag all the wines. While waiting we enjoyed a chilled Picchetti White Pavone with cheese,  meats, and shrimp. Lili and Jose arrived with sausages and bread with chimichurri sauce. We began when Paul and Jennifer arrived. We tasted, noted, and compared, while enjoying each other's company.

C - 2010 Picchetti, Shoemaker Vineyard, Paso Robles came in first place with an average of 3.84. It cost $27 (club case price). Sue and I brought this. We are members of this local winery. I thought it would be fun to throw it in. I was incredibly shocked when it came in first. Truthfully I've always enjoyed it, but never thought it incredible.

A - 2009 Altocedro, Gran Reserva, La Consulta, Medonza came in second place with an average of 3.39. It cost $50. Michel brought this. He found it at BevMo, where the placard pronounced it a game changer and gave it 100 points! 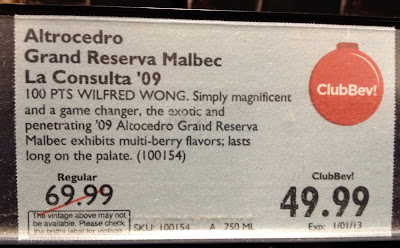 F - 2009 Catena Alta, Estate Rows tied for third with an average of 3.33. It cost $60. Paul and Jennifer brought this. Jennifer found it on a list of great Malbecs.

B - 2011 Urban Uco, Malbec-Tempranillo, Mendoza tied for third with an average of 3.33. It cost $10. Bob and CJ found this at K&L. Robert Parker's Wine Advocate gave it a 91 and it was cheap too. I was uncertain this qualified as a Malbec, given it's 50/50 Malbec/Tempranillo but Bob consistently insisted no one knew what it meant for a bottle to be designated as a Malbec. I let it go.

I - 2011 Achaval Ferrer, Malbec, Mendoza came in seventh place with an average of 2.93. It cost $20. Jose brought this. Jose knew I was bringing the Finca Bella Vista and wanted to see how the less expensive bottle compared.

D - 2008 Catena Zapata, Adrianna Vineyard, Mendoza came in eighth place with an average of 2.86. It cost $110. Sue and I brought this. I looked up the most well known Malbec label and then found the best vintage of it I could. Robert Parker's Wine Advocate gave this a 97.

Red meat was the recommended paring for Malbec. Sue grilled us up some humongous steaks. When she brought the plate of 11 of of these jaws dropped. Bob still can't get over it. 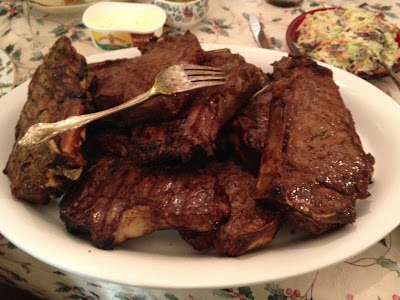 In addition to the bone in New York strip steaks, we enjoyed coleslaw, potatoes, and butternut squash gratin. 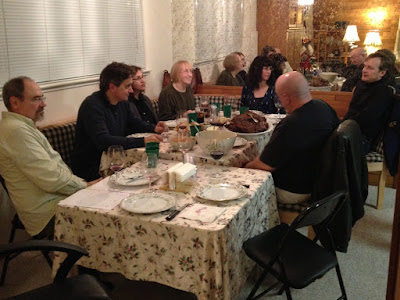 After feasting we enjoyed a blueberry cream pie Bob and CJ had brought.
Posted by Rod Magnuson at 2:13 PM