While tasting with Ted and Shannon and others in Los Olivos I met a character in the The Los Olivos Tasting Room & Wine Shop. He gruffly expressed his strong opinions on Pinots, one of which was that Santa Lucia Highland produced the best Pinots. Given I haven't explored much of the Pinots in the region, I thought this would be the perfect opportunity to give some a try. It was my birthday, which excused the K&L bill and besides, The Emperor of Pinot demanded it, or so I told Sue. 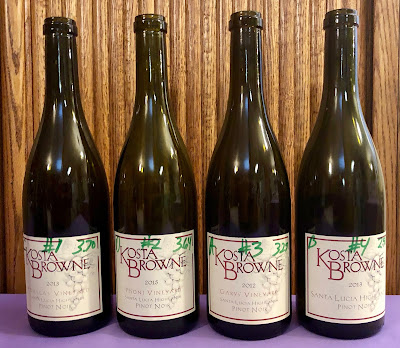 I didn't set out to taste only Kosta Browne SLHs, but I wanted all the well known vineyards, all with a similar, drinkable vintage. These seemed the best options K&L had.
Posted by Rod Magnuson at 5:18 PM