Two of our three kids were going to be gone over the weekend, one in New Orleans and the other in Chicago. Both their trips sounded fantastic, much better than anything we had planned for the weekend, which was nothing. I knew the Farrells were going to be in town, so Thursday night I asked if they wanted to do a last minute blind tasting over the weekend. Ted replied they were in. I pinged Jose to see if he was available. He was, but unfortunately Lili was visiting her sister. Now all we had to do was figure out what to taste.

I put all my wine into VinoCell. It showed me what options I had. I initially offered to do a 2014 Gap's Crown tasting, trying different Wineries' take on the fruit.

Saturday morning Ted countered and we agreed on Russian River Pinots. I let Jose know what the plan was and made certain he knew he didn't have to bring anything, given we were starting in six hours.

The weather was nice, blue skies and 70s. We set up outside with a hodge-podge of glass types as I was too lazy to open up all the burgundy wine glasses. 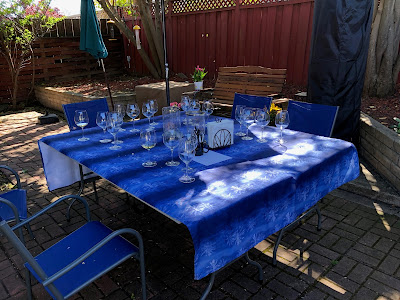 We started with a lovely 2015 Freeman, Ryo-Fu, from the Green Valley of the Russian River. It was nice. Shannon really liked it. 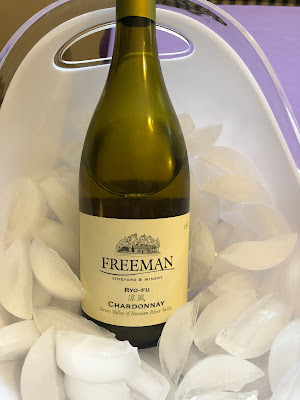 As we tasted, I noted all of the wines were great, but three of them I would take home and sleep with, they were that good. 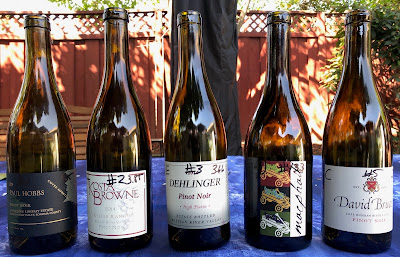 B - 2014 Paul Hobbs, Katherine Lindsay Estate, Russian River Valley came in first place with an average of 4.05. Sue and I brought this. It cost $135. We bought this while tasting at their Vineyard Designate Experience. Truly decadent pricing for a Pinot and a tasting. The tasting began at 10:30 in the morning. I texted with Carlos and Ted after the introduction sparkling, asking if $120 was too much to spend on a Chardonnay. The answer is yes, but I bought a couple to share. In my defense, I didn't buy either the $300, $400, or $500 cabs.

A - 2014 Kosta Browne, Keefer Ranch, Russian River Valley came in second place with an average of 3.85. Sue and I brought this. It cost $90. I bought one from my Kosta Browne allocation. Next offering I may have to buy 2.

E - 2014 Dehlinger, High Planes, Russian River Valley came in third place with an average of 3.66. Ted and Shannon brought this.

D - 2014 Macphail, Dutton Ranch, Green Valley of Russian River Valley came in fourth place with an average of 3.30. Ted and Shannon brought this.