As you might have guessed, I went a little crazy planning tastings when the 2021 SF Chronicle Wine Competition results came out. Why? I can't say. It might have been the weight of the pandemic, or perhaps I needed a distraction from my job, but in the end, I lined up an unprecedented number of tastings. In this effort I tried to pick some varietals that I was less familiar with. To that avail, I added an Albariño tasting. Only a subset of my friends are interested in a white tasting, but thankfully enough. Truth be told, I would do it without interest, but wine is always better with friends.
To find my wines, I started with the Albariño: 2021 Awards. I could not find the Double Gold winning, Idaho Albariño from Williamson Orchards and Vineyards. I contacted them because the wine was not listed on their web site. They told me they had limited sales to club members after winning the award. Apparently, it was flying off the shelves. The idea of trying an Idaho wine intrigued me, but not enough to join another wine club. Fortunately, I was able to find 3 choices I was happy with.
The wines were in my hands and I planned to distribute them with the birthday Sangiovese wines. Coincidentally I received an email from Wine Enthusiast titled "Fall in Love with Albariño from Rías Baixas." I took this as a sign that I should add an Albariño from the region to the tasting, so I ordered one. I then waited two weeks for them to ship it to me. So much for distributing them at the same time. The good news was we had a representative from the home of Albariño!
We met on a Saturday, a little earlier than usual given a Michael Franti virtual concert we planned to attend. We had a great time tasting with everyone. 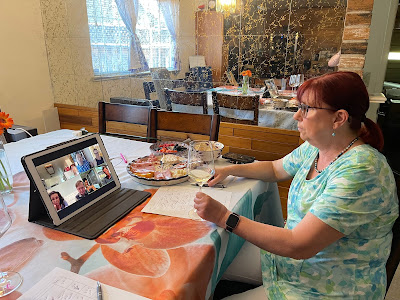 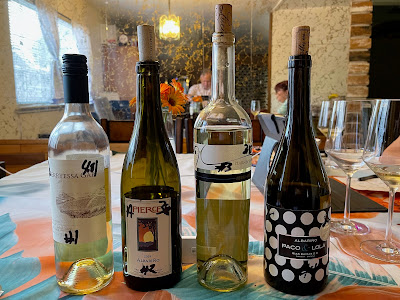