One Last Zin Tasting for the Road

Our move was a weekend away. Friday we were moving all the wine. I had a crazy idea to do one last Zin tasting on Saturday. I figured as long as we kept it simple, like ordering pizza, it would be a welcome break from the the moving. I pinged Ted Wednesday night. He was game. He offered his place in order to save a dog sitter. I was cool with this, but he had to agree I could pay for the pizza. He did. I had a zin tasting ready to go, but would only do it if Jose were involved. Jose used to be big into Zins, he's now more into Cabs. I pinged Jose. He was in too. It was on!

I had a zin tasting in the cellars, yet another inspired by the 2021 SF Chronicle Wine Competition results. I had never tried any of the wines.

Ted was set up for four wines, so he randomly chose two of the three I had brought. It was a warm day. We started with a refreshing Savvy B from Halleck.

We had a great time tasting with everyone. 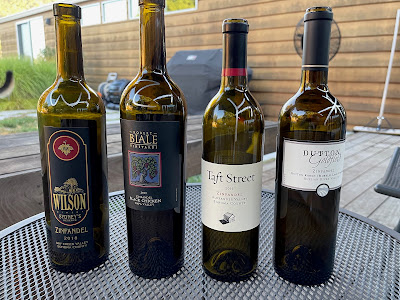 Z - 2019 Robert Biale Vineyards, Black Chicken, Napa Valley  came in second place with an average of 3.98. It cost $50 directly from the winery.

The Zins were all really good.

I DoorDashed Round Table Pizza, which was enjoyed with a salad Shannon made from vegetables out of their garden. We also enjoyed a GrGich Zin Jose brought and the Once and Future.