We hit the wineries of downtown Monterey figuring that while downtown would surely be packed, the tasting rooms would probably remain empty until afternoon when the joy of parenting would have caught up with some of the parents.

We hit Bargetto at 11:15, but unfortunately it wasn't open yet, so we moved on.

Ironically, days before I had taken notice of the California State Fair 2011 contest winners, as previously mentioned. I looked at what I thought were the results from 2011 and sent Bargetto a message of congratulations in an attempt to find the double gold Santa Cruz Mountains Estate Pinot. I later realized that I was looking at the 2010 results. Doh! I figured Bargetto would write me back, informing me of the wanker that I had been, but instead they found a bottle somewhere deep in their storage for me to enjoy. All of this I totally spaced as we stared at the closed sign.

A Taste of Monterey

We were the first of the day to taste at this somewhat hidden Wine Center, around the back and up the stairs, which represented tons of regional wineries. The place had a large shopping area, and a wine press used by Paul Mason. The back wall was all windows, showing a fantastic view of the bay. It was a clear day. The bay was beautiful and full of kayaks.

Our pourer took good care of us, telling us about the other wineries on the wine walk, and discussing interesting wine events she had worked at.

The tasting menu had 3 different flights, 2 of which we tried and enjoyed between us. 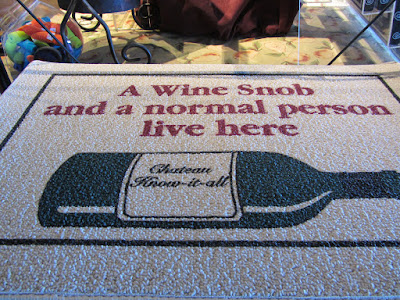 Scheid was unfortunately closed for a private party.

Baywood Cellers was a nicely decorated place, with a long bar. 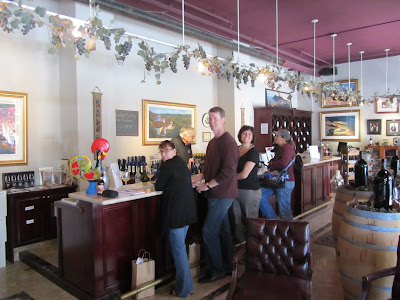 One of the nicest guys you'll ever meet took care of us. He had a strong Boston accent. He told some great stories, that at times I wondered where were going, but always ended up in an appropriately warm or fun place. When asked if he preferred the Tempranillio or the Malbec, he said, "I like the Syrah." He told us that he had spent 3 sessions watching "the Hobbit thing, but didn't understand a thing of them". I assumed he was talking about The Lord of the Rings, and smiled.

After some good banter, Ted broke out his new wine joke:


An old couple was setting on the porch swing, enjoying a glass of wine.
The woman said, "I love you. I don't know how I would survive without you."
To which the man asked, "Is that you or the wine talking?"
The woman replied, "It's me, talking to the wine."

The wine was hit or miss, but all of us enjoyed the Syrah. We took some home to enjoy again.

Our final stop was Pierce Ranch, a nice tasting room that looked like it was once a house. The tasting area wasn't large, but big enough for 8 to 10 tasters. A vinyl Bob Dylan album served as the score for our tasting. On the wall, Ted noticed a post it note: Wine Tasting = Success! He thought this seemed appropriate for me, given my quest to taste all the wineries in California.

Our pourer took good care of us. He was very knowledgeable about the wines and answered every question we had about the lesser known varietals and blends.

Pierce specialized in Spanish and Portuguese varietals, a refreshing change from what we'd had. Everything we tasted was very nice, and very reasonably priced.

Winery/Deal of the Day: I have to give the nod to Pierce Ranch for the best winery as well as the best deals. Their entire stock was a deal.
Posted by Rod Magnuson at 9:24 PM