We hit the river road wine trail of Monterey wine country with Ted and Shannon. River road is a winding road, somewhat barren, that runs along side of 101, full of vineyards, tasting rooms, and some nice vistas.


It wasn't very busy the day we were there. We guessed this was due to the Salinas Rodeo and U.S. Grand Prix at Laguana Seca going on. We were lucky not to be stopped by the daily Rodeo parade that people were lining the streets for.

11AM - Paraiso Vineyards
Our first stop was the beautiful Paraiso Vineyards. The tasting room was very nice, full of natural light, and had a lot of room for tasting and browsing. It doubled as a boutique with items ranging from chocolates and spa items, to a giant mirror and a chaise lounge. It was an interesting place. The back opened onto a large porch that had seating and a view of grape vines. It was lovely. Picnic tables were also nearby. I was worried that the area would get hot later in the day, but our pourer explained that this was not the case, since winds picked up around 2 and cooled the valley.
It looked like they had a good area for events as well.


Our pourer took great care of us, telling us what we need to know about the wines, giving us recommendations for other wineries to visit, and other interesting tidbits. It was a pleasure talking to her.
The wine was excellent. Our favorites included 2 of the 3 Pinots we tried, and the Syrah. The Faite Pinot was good too, but seemed a tad expensive at $65. The Irie Zin didn't work for most of us, but introduced us to the new word, which means a state of no worries. My wife also picked up a couple of Rieslings to share with friends; they had a great special on them; buy one, get the other at half price.
Winery Details
Hahn Winery
Hahn had a large tasting room, with plenty of counter space. The had a giant back porch, with nice picnic tables, and a lovely view. It was a step up from Paraiso, but both would be enjoyable picnic destinations. 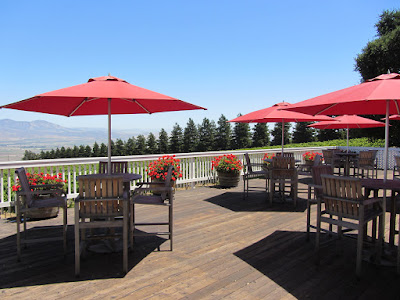 The restrooms were very nice and had rocks in the sinks, which reminded me of a trip to Bimbo's to see Poe where a good friend was overly impressed with ice in the urinals. I'm not certain I understand the purpose in either case.
Our pourer took good care of us. She filled us in on some of the history. The place was a horse ranch at one time, which could explain the rich soil she joked. The Hahns purchased the place from Smith and Hook 30 some years ago, but still used the Smith & Hook label for their high end wines. They also said they were starting up a culinary institute.
The wine was very good. I liked the 2009 SLH Estate Pinot, the Meritage, and the Cab. They also had a blend that none of us were familiar with: GSM, a Grenache, Syrah, and Mourvedere blend. The 2010 GSM tasted good and was an incredible deal at $12. We took a couple home to further prove or deny our initial thoughts.
After we purchased the wine, our pourer offered to carry the wine to the car for us. I thanked her, but explained that Ted and I were burly men and could handle it.
Winery Details
Wrath
On our way to Wrath we found an interesting old house. 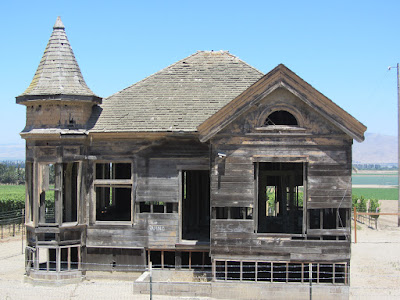 Across the road were a bunch of cows. 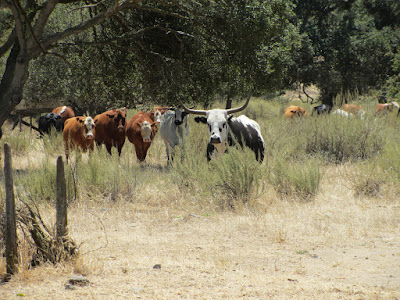 As we took pictures of them, they slowly moved towards us. We weren't sure why they seemed strangely attracted to us. Could it possible have been Ted's mooing?
We got back in the car and headed to Wrath. Shannon introduced us to PopChips, whose motto, "Love, without the handles", was pretty catchy.
Wrath was like an oasis rising out of the fields of grapes on river road. The tasting room had ample room to taste. It had a lovely outdoor area, with picnic tables, viewing a lake surrounded by flowers. 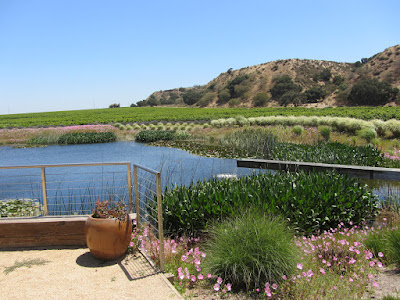 In the distance you could see the interesting old house we saw on the way. It turned out to be on their label. 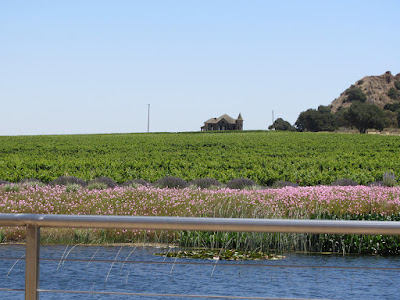 Our pourers took good care of us, waiting on us outside at one of the tables. We noticed the cows had seemed to follow us down to Wrath. One of the pourers explained that it was feeding time for the cows and they were heading to eat.
The wine was good. They are known for the Chards and my wife picked one up. I picked a Pinot, shocker!, to enjoy later.
Winery Details
Pessagno Winery
Pessagno had a large tasting room. It was a nice place to hang out. 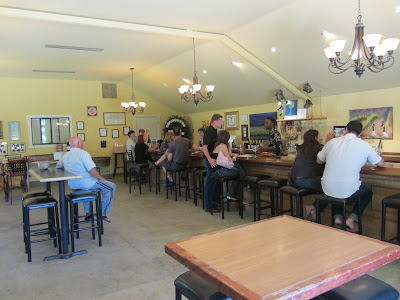 The outdoor area had picnic tables with a view of a lake that was almost an eye sore when compared to Wrath. 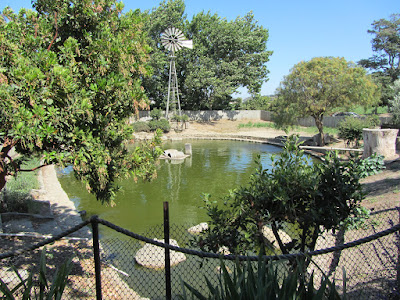 We were treated to some very good tasting, fresh wild boar sausage. The boar had been shot that morning! We were taken care of by two different pourers. One was a pleasure to deal with, while we never clicked with the other. He was very enthusiastic, and liked to talk, but the interactions were not comfortable. My purchase was somewhat uncomfortable as well due to one of the staff.
The wine was hit or miss. We picked up two of the lower end Pinots and a Zin to try again later.
Winery Details
Marilyn Remark
The tasting room was in the corner of a shed. It wasn't fancy, but it worked well enough. As we entered, another couple was leaving; they let us know that they thought this was the best wine in the area. 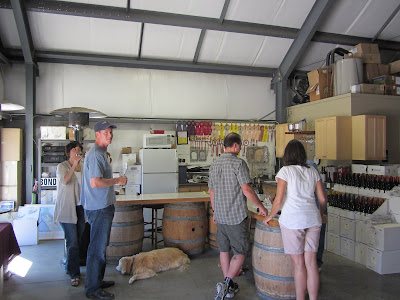 The wine maker, Joel Burnstein, poured for us. We were impressed that the wine maker was taking care of us. He informed us that in addition to being a pourer, he was also janitor and book keeper for the winery. He was an incredibly nice guy. We had fun picking his brain and joking around as we tasted. He explained to us that the name came from his better half's maiden name, not his name before the surgery.

One of his two dogs, Snead,  was resting on the cool concrete floor. Joel showed us the picture of him and his brother Hogan in the book Wine Dogs USA 2. They were adorable. He told us his customers would bring the dogs treats. We all took turns petting Snead, but he wasn't incredibly interested in us. He looked worn out. His brother was outside by the house and wouldn't come when called, but that didn't stop Ted from saying hello with a nice pet. 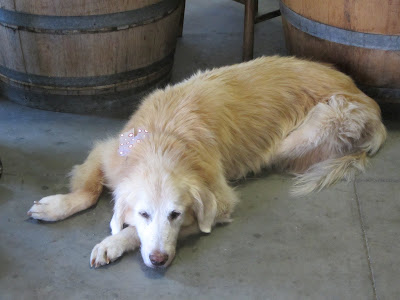 The wine was very good. They specialized in Rhone blends. They had a very nice GSP, a Grenache, Syrah, Petite Syrah blend. Joel said it used to be a GSM, but he couldn't find a good source of Mourvedere. The Grenanche and Syrah were also very good.
Winery Details