On a whim I thought I could further my long term goal of tasting all the wineries around me by going out on the Santa Cruz Mountains Winery Association's Summer Passport and hitting some of the wineries that seem to only open on that day. I sent out a message. Bob and Carolyn replied, they were in.

I've never ventured out on a passport day. I've heard there were mobs of people, including roving packs of young people driving around in party vans, more interested in getting intoxicated, than wine appreciation, hardly the type of thing that sounds appealing. 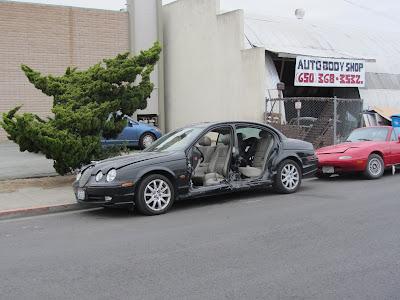 I quickly realized that I was being silly, as my wife would say. Next door was an auto body shop that must have been using the cars out front for parts or something. No one was going to put my car on blocks, and steal everything they could off of it.

The winery had an inviting exterior. 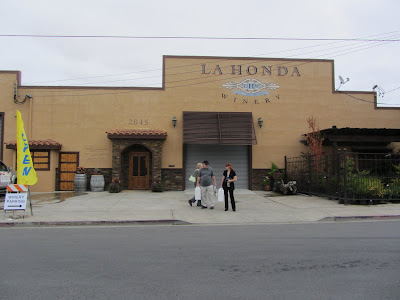 We were warmly greeted at the door. We attempted to purchase a passport, but were informed that they did not have any, but we could taste now and purchase one later at Domenico, a mile awhile.

The tasting room was very impressive. It had plenty of room for tasting, was nicely decorated, and had a gift shop. Plenty of tasty food was laid out to enjoy.

We were taken care of by a co-owner of the winery. I'm embarrassed to say I don't remember his name. He was fun, friendly, and informative. He took very good care of us. Sue and I were the first ones there, but had to meander through the first two tastings, waiting for Bob and CJ to show up. Our pourer made the time fly with never a dull or awkward moment. Everyone we talked to was very nice and informative.

We tasted 2 whites and 4 reds. The 2010 Sauvignon Blanc had a fruity smell, and a clean, crisp taste. The 2009 Chardonnay was more my speed, dry, and tasty, for a white. We then tried 3 cabs: 2007 Naylor's, 2007 Salinian Block, and 2007 Lonehawk. The Naylor's smelled and tasted like a fresh cab to me; Sue smelled hints of chocolate. The Salinian was more full bodied, didn't get much smell, and didn't taste as good to me. The Lonehawk had a lovely smell, and good taste. My initial impression favored the Nayler's, but I picked up one of each to try again. The red blend and the pinot were both sold out and not being tasted. Bob pulled out his trick, "If I buy one, can we taste it," which I've copied many times, and we all got a taste of the 2009 Pinot, which tasted a little young, but good none the less.

We got lucky finding a parking place right in front of Vino Locale. Our luck ended there though, as it was closed for a private party. It looked like a nice place, from the outside. The plan was to taste Mun's wine and then eat here. We ate at La Strada instead.
Naumann Vineyards

After lunch we headed down south and up Montebello Road to Naumann. The navigation system told us we were there about a mile early. I thought we had missed it and would have to call for directions when we reached Ridge, but right before Ridge we saw a sign on the right side of the road and pulled in. Parking was painful. I imagined this is only true passport weekend, since they can accommodate 10 cars easily. We parked in the drive way and followed the signs around back.

Out back we found an incredible view of the valley from the house' huge back porch. Food and water were available, but I didn't check them out, as the view was more interesting. From the porch you could also see the grapes, growing on the vines.

The staff was attentive, informative, and cordial. The place was packed, but I never felt like I had to wait for my next tasting. We didn't get a lot of attention, given the size of the crowd, but no complaints. 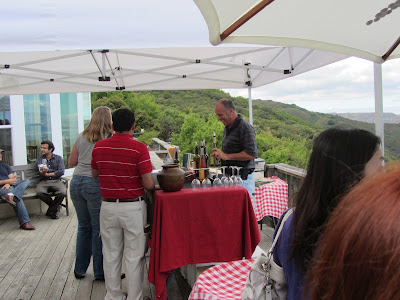 The wine was all Merlot based, except for a Chard. It included a Rose, a Chardonnay, two Merlots, and a late harvest Merlot. I thought the Rose and the older of the two Merlots, which tasted sour, were both nice. Unfortunately, none of us thought the wine was incredible.

We were able to buy our passports here. I bought ours and a couple of bottles to confirm or deny our initial impressions at a later date. 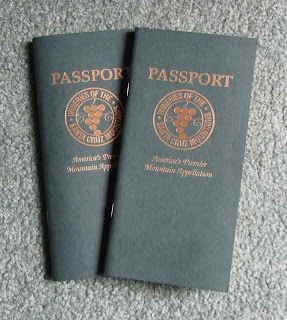 Since we had just paid $40 for our passports, we figured we may as well get our money's worth, and decided to check out Ridge, despite having gone there many times before.

Ridge was packed, but we were lucky enough to get room at the tasting bar.

Ridge had a big tasting room, able to accommodate many comfortably. It had a great outdoor area, with picnic tables, and an incredible view of the valley, a little higher up from Naumann.

We were taken care of by a very friendly, informative, and knowledgeable pourer. He impressed us with his decanting skills, pouring freshly opened bottles into decanters and back into the bottle without any aid, all the while reminding us that his display proved he rarely tasted while working. He was a lot of fun. He went out of his way to try and find a wine that Carolyn liked.

The wine was wonderful, as it usually is. My favorite was the 2008 Buchignani Carignane. Ridge are the masters of Zin, for sure, but none of the Zins we tried really worked for me.

After the tasting, Sue and I checked out the view.


We didn't see any rattlesnakes. 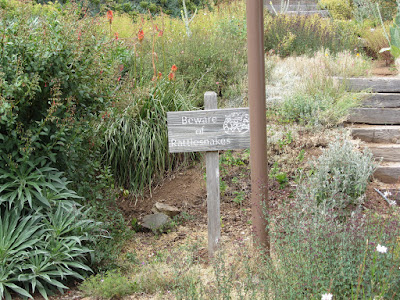 I'm not certain why, since we've been there many times before, but Bob wanted to hit Picchetti on the way down.

Pichetti was packed as well, but they quickly found us a spot from which we could taste.

Pichetti has a huge tasting room. Since we usually visit at open time, I've often wondered why they needed this much room, but after seeing the passport crowd I now understand. Pichetti has very nice grounds, roaming peacocks, a nice picnic area, and a rustic farm appeal.

As always, we were served by friendly, informative, staff. He was more rushed today than usual, but had time to tell us about all the wines we tried and any options we had. Sue and I are members, and he went out of his way to tell us about the 8 bottles of library Merlot, and the limited supply of the Estate Zinfindel they had left, for club members only.

The wine was very good. My hope was to find something CJ liked, and the forth attempt we succeed: the white dessert white, Mission Angelica, served with a lime and an ice cube. Since my love, the Belicitti Zinfindal is out, I no longer have a day to day from Pichetti. I really like the Vino Di Vincio, Cab, and Estate Zinfindal, but they're all a little too expensive to be having daily. I try to keep a couple on hand for those special occasions, and Pichetti's recent buy half a case and get the club case prices really help.

We had a great day. While we did run into crowds, I don't think we ran into any vans of heathens, though we did get a hint of one as we were leaving Naumann.

That said, I don't recommend passport days for the more serious taster. The appeal of paying $40 once and getting free tastings isn't typically a win for us, since we usually buy a bottle, offsetting the tasting fees. The crowds are a real turn off as well. I like enjoying tastings with my wife and friends, spiced up with the occasional stranger's comments, but I prefer the more intimate tastings, and tend to go earlier in the day to avoid the crowds.
Posted by Rod Magnuson at 11:30 AM