In a last ditch effort to get one more Santa Cruz Mountain's winery in before Summer ended, my wife and I headed to La Nebbia late Sunday afternoon. La Nebbia is location in Half Moon Bay, which means we had to take the dreaded two laned highway 92. 92's speed limit is 45 MPH, but I don't think we got over 20. Thankfully, the trip went pretty fast, only taking 45 minutes; the GPS said it should have taken 33 minutes.

The pumpkins were starting to appear for Half Moon Bay's big Pumpkin Festival that they have every year. 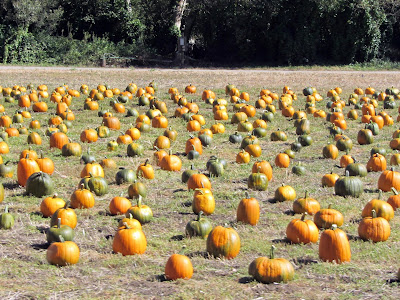 The place was packed, but we got lucky and found a spot. 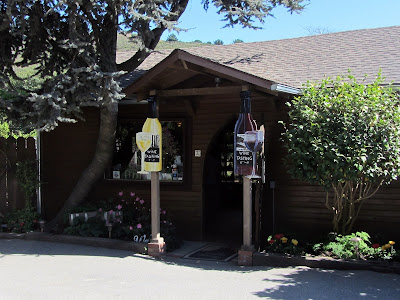 The tasting room was nice, though a tad small, the bar holding maybe six comfortably. There were 12 people in the room when we came in, the rest of the people must have been in the outdoors area. It took close to ten minutes before we were offered any service; two couples were attempting to settle up, which seemed to preoccupy the hostess. The hostess later ranked the busy level at the time a 2 out of 10; I can't imagine how slow a 10 would have been. 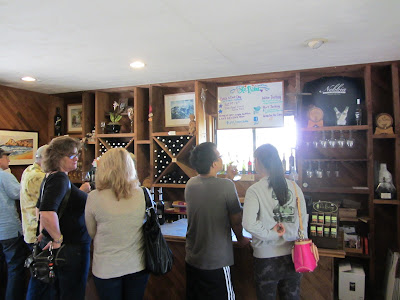 Tasting was $8 for 7 wines and a decent, though a tad small, souvenir glass. The fee is not refunded if you purchase any of the wine, which I guess makes sense given the glass. Given the choice I wouldn't have paid for the glass, but it's not a choice. On the plus side, the glass is usable as a backup, unlike most other souvenir glasses I have purchased, which are way too small.


The wine was hit or miss, mostly miss for me. We tried three whites: A Sauvignon Blanc, a Chard, and a sparkling wine. The sparkling wine was very sweet; after a sip I let my wife enjoy the rest. We also tried four reds: A Sangiovese, which was nice, a Zinfandel, a "mystery" Merlot, and a Cabernet Sauvignon. Sue liked the Merlot in addition to the Sangiovese, which was a mystery because it wasn't from the winery; the hostess actually referred to it as such. We passed on the $2 port tasting; it was served in a chocolate cup, which made it tempting.

La Nebbia had a huge outdoor area with picnic tables and two very nice bocce courts. There were lots of groups, spread out, and having a good time. Parts were a little run down, but as a gathering spot, I think it worked well. 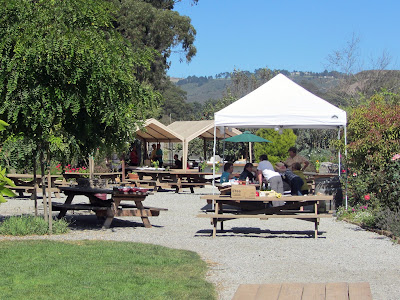 In the tasting room they had a cabinet of glass pumpkins. The creator of these beautiful items was blowing and answering questions near by. He had some really cool looking jelly fish lamps, in addition to numerous other items. 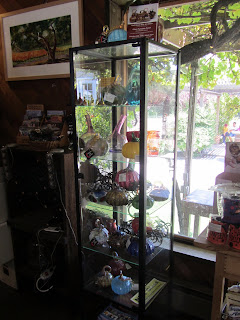 We were told about their Bottle & Cork days, where you bring a bottle, pay $5, and they fill and cork your bottle. It sounded kinda fun.

We headed out, back over the mountain.