The jackal and his wife joined us for a Zinfandel blind tasting.

I wanted to start at 6, since it's getting cold and dark earlier these days. By 6:15 everyone but Jose and Lili were there. We took a vote and the consensus was to wait until they arrived. I pulled out a 2009 Marilyn Remark Viognier to keep the growing unrest at bay.

Michel had arrived a little early and had prepared a lovely plate of pâté with bread. Pâté isn't really my thing, but in the spirit of expanding my tastes I gave it a try. It tasted meaty, which, to me, was a strange taste for a spread. Bob and Carolyn had also arrived a little early with cheese and crackers. So much cheese that I had to wonder if they had left any in the store. Carolyn assured us all that the cheese choosing was all Bob. 15 minutes after arriving Bob was still preparing his incredible cheese plate.

Park entertained with tricks on his diablo.


Bob brought out his beautifully arranged and plentiful cheese plates. We all dug in. Everyone enjoyed each other's company while waiting. About every 5 minutes someone called or texted Jose. He said he was on the way, so we sat tight. Bob joked that we were having a wake for the late Jose. The cheese was spectacular! Indulging in it whet everyone's appetite for a glass of wine.

Finally, Jose arrived sans Lili. She wasn't feeling well, but was kind enough to prepare lasagna for us. Sue and Kait randomized the bottles and we started tasting the 5 wines, one by one. At some point Bob told a joke about an infinite number of mathematicians going into a bar and ordering a drink. I can't remember the rest. I do remember that he said Carolyn laughed when she originally heard it. I don't remember if anyone else laughed that night. While tasting I brought out a couple of aroma wheels. Carolyn and Ling entertained us by finding strange aromas such as mousy. This wine smells mousy, yum!


After we tasted the originally planned 5, we threw in 3 more. Bob and Carolyn, Carlos and Ling, and Sue and I had an extra on hand that we brought to share.

After compiling the ratings, I went crazy and opened the other three Zins I had in the house. I opened a Storrs Rusty Ridge so Jose could argue his case that it was actually a Pinot. I next opened a Ridge East Bench, because I knew Bob liked it so much. Lastly, I opened a 2007 Picchetti Bellicitti Zin. Michel tasted it and said, "Now this is a five!" 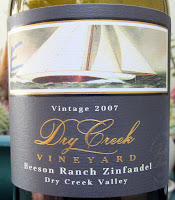 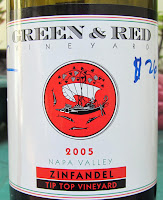 D - 2007 Dashe, Florence Vineyard, Dry Creek Valley came in fourth with an average rating of 2.875. Sue and I brought this. It cost $28. I found this by googling for the best Zinfandel in California, which lead me to The Best Zinfandels in California: Tasting at ZAP 2010. I then picked one of the best rated wines.

H - 2008 Ridge, Paso Robles, Benito Dusi Ranch came in fifth with an average rating of 2.875. Ling and Carlos also brought this. It cost $30. I did not make it clear to them that group favorites were not allowed. I thought this was the best wine of the tasting. 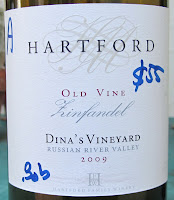 B - 2008 Storybook Mountain Vineyards, Napa Estate, Mayacamas Range also tied for sixth with an average rating of 2.5625. Michel brought this. It cost $30. He said it came highly recommended from one of the staff at K&L. He joked that he would return to K&L to discuss its showing.

F - Martinelli, Russian River Valley, Jackass Vineyard came in dead last with an average rating of 1.8125. Sue and I also brought this. It cost a whopping $95! I noticed it on the front page of the website I bought the Dashe at: Wine Ranger Cellars. The site said it received a 94 from Robert Parker. I'll admit, I went a little crazy with this order and was incredibly disappointed to find a sweet, jammy wine. If you haven't guessed already, Sue was not consulted on this purchase. 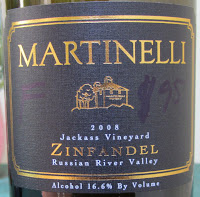 Once again we proved that money doesn't necessarily matter, or perhaps we just don't have that expensive tastes. Either way, I'm not certain I'll learn.

What is amazing is that Dry Creek took first and second. Years ago Jose and Lili put on a blind tasting and Dry Creek came in second, after Burrell School Pinot.

We headed inside to try some of Lili's lasagna, and Sue's chicken and dumplings.