Keimpe was in town. Normally we go out for drinks and a movie on a Thursday. I asked him about his movie preference and he said he would prefer to do a blind wine tasting with the snob. So we put something together. 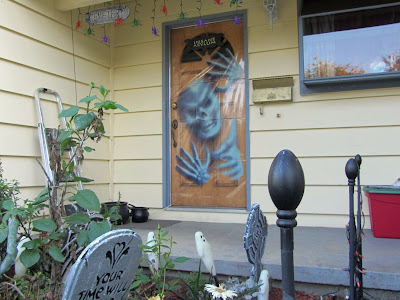 Our guests arrived at a mostly decorated house, it being two weeks before our annual Halloween Bash. It was dark by the time we started, nearly 7:30, but thankfully still warm. Summer was unfortunately over. We randomized the bottles into decanters and Paul and Jennifer, Keimpe, Michel, and Sue and I began tasting.

All the bottles were more expensive than Keimpe typically indulged in. At one point he exclaimed, "If this is a $20 Syrah, I'd gladly take an $8". I wished we would have thrown in one of these less expensive wines. Bob was planning to bring one, but unfortunately didn't make it; Carolyn wasn't feeling well. Keimpe promised to give me the name of the bottle he preferred so I could try it.

D - 2007 Big Basin Vineyards, Rattlesnake Rock, Santa Cruz Mountains came in first with an average rating of 3.92. Sue and I brought this bottle. I found it searching K&L website for the highest rated Syrah in the Santa Cruz Mountains. In truth, the website only has Syrah's from Big Basin Vineyards. The winery has a tasting room in downtown Saratoga, next to Cinnabar. It cost $54. 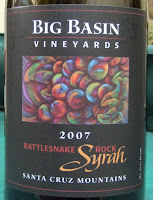 E - 2006 Shaw & Smith, Adelaide Hills came in second with an average rating of 3.67. Keimpe brought this. He got it from K&L in Redwood City. It was recommended by the staff when given two constraints: It must be at least $20 and it must have a screw top. He really likes screw tops and I think he thought he would annoy the "snobs" at the tasting with a screw top. It cost $29. 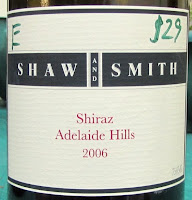 F - 2009 Eric & Joel Durand "Empreintes" Cornas came in third with an average rating of 3.17. Sue and I also brought this bottle. The rules are you can bring one, but when you're hosting who's going to argue. Admittedly I went a little crazy, picking 4 Syrah's. I picked this one because it was French. I thought it would be good to have one from a number of different continents.  It cost $35. 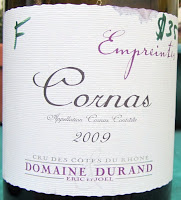 B - 2008 John Duval Wines, Entity came in fourth with an average rating of 2.83. Michel found this on the K&L website. It looked really good on paper, receiving a 94 from Robert Parker, a 93 from Stephen Tanzer, and a 91 from Wine Enthusiast. I too found this wine in my searching. I discovered it to be a duplicate when asking Keimpe about his choice. It cost $32.

A - 2002 d'Arenberg, McLaren Vale, The Dead Arm came in fifth with an average rating of 2.67. Sue and I also brought this bottle. It was the third continent, was rated highly, and was a wine I had dear memories of. Jose had given me one of these some years ago for my birthday. It cost $50.

We maintained two traditions that night. First, the most expensive bottle was last, and second, Paul's bottle was last. The latter prompted Paul to yet again proclaim the next tasting would be different. Of course, Ted insisted that his bottled would have won, had he decided to join us. Ha!

For me, a number of the wines tasted like cab-wanna-bes, with notes of coco and an almost cab taste. I don't recall seeing a single inky Syrah, which is what I think of when I think of Syrah. I haven't had much experience with Shiraz, so I didn't know what to expect.

We retasted as we enjoy the tritip and cheesy potatoes Sue had whipped up for us. My plan was to order pizza, but she didn't think that would do.
Posted by Rod Magnuson at 1:20 PM