We drove a mile down the winding Upper Zayante Road to our second stop: The primary winery, Silvertip VINEYARDS. 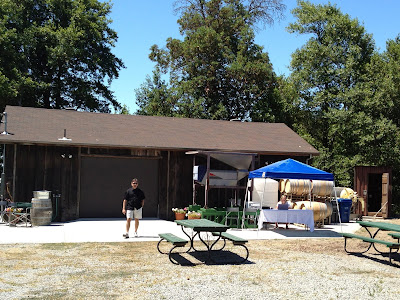 We were pleased to see Michel had made it. Ted had warned the traffic on 17 was horrible and I figured Michel might be late, but it wasn't the case.


The tasting was free, and took place right outside the production building. We were the first to arrive of the day, the second time they had ever been open. The winemaker, Paul Stroth, poured, passionately talking about the wine, and answering any questions we had. We had seen Paul earlier in the year, when he spoke on the panel at Pinot Paradise.

Paul told us how the winery got its name. The family owned property used to be Nelson’s Christmas Tree Farm. In 1999 they moved 9 acres to Pinot and Syrah and looked no further than the most prized Christmas trees, Silvertips, for their name. Today they grow 20% Chardonnay, 40% Syrah, and 40% Pinot. They produce 320 cases a year, but could ramp up to 800 to 900 cases.

Paul was a great host. I thought he looked a little young to be a winemaker. He thanked me, saying he was 39, and told us his history in the wine world. He started off volunteering at Kathryn Kennedy, and later interned at David Bruce. I'm going to have to check my age-o-meter. 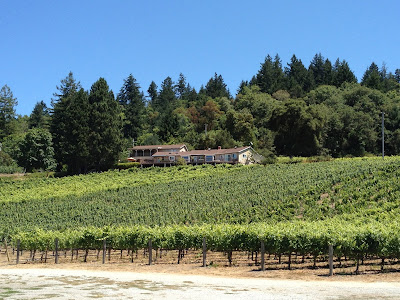 The location was beautiful, smack dab in the middle of the vineyard. On the hill you could see the grandfather's ranch. It was gorgeous.

Paul started us off with a nice Chard, followed by a Rose of Syrah. Next we tasted two very scrumptious Pinots: The first being the Petite Street Cuvee, and the second being the Silvertip, produced from the best barrels. Finally, he finished with a incredibly flavorful Syrah. All of the wine tasted very good.

The wine was reasonable for a boutique winery: Chardonnay $25, Rose $10, Petite Street Pinot Cuvee $25, Silvertip Pinot $35, and Syrah $25. They had good discounts as well, 10% off 6 bottles, 20% off mixed case, and 25% of a solid case. We combined orders with Michel to get the mixed case discount, though fortuitously they accidently gave us the solid case discount. We let them know, but they were fine with it. $18.75 for the Cuvee and $26.25 for the Silvertip. That's a pretty good deal for some great Pinot!

We thanked them and headed off to our third stop.

Silvertip is open rarely, by invitation only, so you'll need to get your name on their email list by sending a request to info@silvertipvineyards.com.