The Reverse Wine Snob's #1 Syrah Put to the Test

Sue wanted to make a pot of chili. I told her we could have a couple of people over to enjoy it and do a little tasting at the same time. She was all for it.

Bob and Carolyn, Jose, and even John joined us for chili and a Syrah blind tasting featuring the #1 and #9 wines from The Reverse Wine Snob's May 2012 Top 10 Red list. To give us something to contrast them against I threw in the Syrah we recently picked up from Silvertip Vineyards, and a highly rated unknown wine I found via K&L's website.

We randomized everything and put the wine in decanters in anticipation of our guests' arrival. The group was small enough to supply 4 glasses per person, which is always nice.


John arrived early, so Park entertained him with Fruit Ninja and Spelunky on the Xbox 360. We couldn't convince him to give it a try. Sue carved up John's gift of warm bread and set it out to be enjoyed with the cheese, crackers, and dried meats. The warm bread and brie tasted great! These held my growing hunger at bay, for a while.

Both Bob and Carolyn, and Jose were running late, so my "starvation" lead me to change the normal order and eat a couple of bowls of delicious chili before we began the tasting. When the others arrived, they caught up quickly enough with John and I. Sue topped her great chili with some warm corn bread.

We tried each of the wines a couple of times, sharing and comparing notes, all the while enjoying each other's company. We tallied the ratings and ripped the bags open.
Results

A - 2008 Bonny Doon Vineyard, Le Pousseur, Central Coast came in first place with an average of 2.49. It cost $16 and used a screw top. This was #9 on RWS' May 2012 Top 10 Red list. This was velvety and tasted of chocolate. We brought some of this home when we visited Bonny Doon a couple years ago.

D - 2008 Big Basin Vineyards, Mandala came in second place with an average of 2.49. It cost $39. I found this via the K&L website, searching for highly rated Syrahs. The last Syrah blind tasting we had, the Rattlesnake Rock from Big Basin Vineyards came in first.

C - 2008 Silvertip VINEYARDS, Santa Cruz Mountains came in third place with an average of 2.49. It cost $25. Sue and I picked this up on our recent trip to the vineyard. I remember it tasting very different at the vineyard. 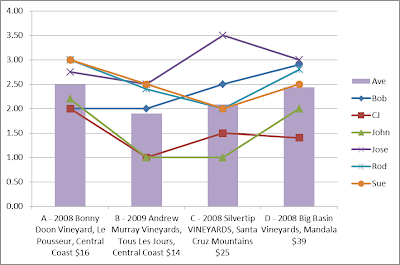 None of the ratings were very high. Out of the 24 ratings, only 4 were I Liked It(3) or better. I don't know what to make of this. I usually like Syrah, but this tasted mostly bitter. Surprisingly Jose's notes indicated all of the wines were drinkable, though he gave half of them less than 3.

The RWS' choices were a mixed bag, coming in first and last, but a good reason to have a blind tasting.
Posted by Rod Magnuson at 6:33 PM